A man of many hats 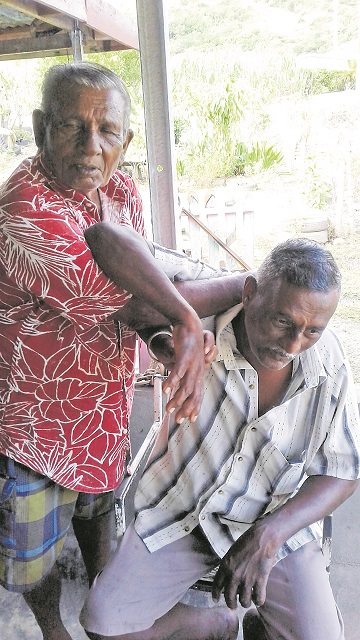 At first glance, I thought the two men were wrestling as I approached the veranda of a home in Rarapatu, Rakiraki, in search of Ram Kumar’s house.

A few seconds after introductions were made, I realised I was at the right place.

In fact, at 86, Mr Kumar is a jack of all trades with massage being one of his many specialities.

The wrinkles on his face and hands told me that he was accustomed to hard work and had weathered many a storm over the past eight decades.

He thought I was there for a massage and gestured to the ‘massage chair.’

After listening to my request for an interview, Mr Kumar probed a bit into my background first before acceding.

It took me some time to dig into his life story.

“I am proud that my story is going to be published in The Fiji Times, but first let me say how sad it is these days that young people don’t want to learn the old skills and trades. They don’t realise there is a lot of wealth that is worth more than money,” he shared.

Apart from that, he said although he was unqualified as a veterinary doctor, he could operate on female dogs, cows, goats, sheep, horses and other animals during the birthing of their young.

He also claimed to have the ability to heal fractured, broken and hurt bones and any animal-related issues.

Mr Kumar said when there were complications in child birth, he had expertise to handle the situation.

He said in days gone by, women gave birth at home and grandmothers used to act as midwife.

Mr Kumar said he had also helped when there were any complications in the delivery of children before.

“Now things have changed, people go to hospital when they have a problem.

He said there were some simple techniques which girmitya women knew and those techniques have not been passed to the next generation.

“That is why these days, for petty problems, we go to the doctors.”

He also claimed he had helped many stroke patients.

He said those who could not talk, walk or move after stroke, have been healed by his massage therapy when presented in the early stages.

When quizzed about his “gifts”, Mr Kumar said he was exposed to massage at a very young age and learnt a lot from his grandfather.

“I used to accompany my grandfather, who was a girmitya, he knew how to massage people and how to treat animals.

“My grandfather would guide and teach me when animals developed complications during childbirth.

“And when he was happy with the way I handled things, he would reward me with lollies.

“This encouraged me to do this type of work more and more and when I grew a bit older, I began to do work independently without his help”.

Mr Kumar said his grandfather Mr Chattar passed away at the age of 92 years.

He was from Bharatwaaj, India.

Mr Kumar said the secret to his long life and good health was “suki”— the tobacco and leaves of pandanus that he smokes.

Apart from this he reads Hindi books and he does this without the use of spectacles.

However, he said his eyesight began to fail when he was in his late 40s and he was forced to stop reading.

Mr Kumar said when his grandfather was still alive, he had got word from Calcutta that poor eyesight could be restored by eating the eyes of the Kanace fish.

He began eating the eyes of the fish and now he believes because of this, his eyesight has been strengthened and he can now read without glasses.

Mr Kumar has piles of Hindi books which he reads every day.

Before I bade him farewell, Mr Kumar revealed another of his many secrets to longevity.

“Work hard, sleep early and wake up early and eat a lot of fish instead of meat.”