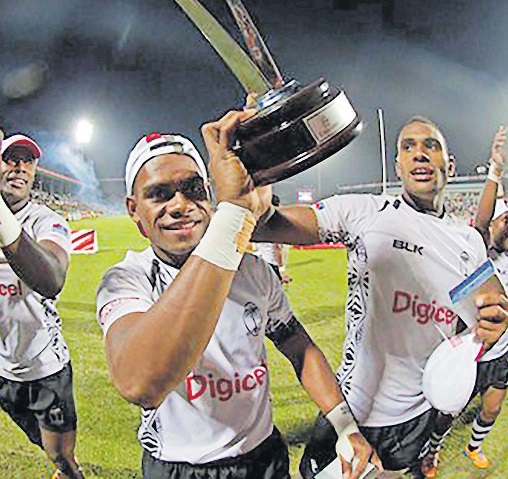 Members of the Fiji 7s team celebrate after clinching the Dubai title in 2013. Picture: WORLD RUGBY

The Fiji 7s team has just won twice in Dubai since the inception of the World Rugby Sevens Series in 1999. The side managed to win in 2013 and 2015.

Ironically, Ben Ryan coached the national 7s team on both occasions. Since the glorious days of 2015, our boys have yet to taste victory in the Dubai heat, and thanks to AFP and Reuters, I will take readers down memory lane to our epic wins in 2013 and 2015.

It was held over the weekend of November 29-30 at the Sevens Stadium in Dubai in the United Arab Emirates.

The flying Fijians won the cup title for the fi rst time, hammering the New Zealand 7s team 44-0 in the semi-fi nals before crushing South Africa 29-17 in the final.

The sun was up and the spirits were high in Dubai, and Fiji was chasing its fi rst HSBC WRSS win of the season. The islanders finished third in 2012, and were knocked out in the plate semi-fi nals by Wales in 2012.

It was an astonishing show of 7s expertise by the South Sea Islanders as they handed a worst defeat ever to the NZ 7s, which had won the fi rst tournament at Australia’s Gold Coast.

It was the first time in 120 matches that the NZ 7s had failed to score in the circuit, and the defeat was even heavier than the 43- 14 thumping they received at the hands of Fiji in the cup quarter-fi nals at the George Sevens in 2005.

Our boys blew the Gold Coast 7s champion away, with eight different try scorers to maintain their 100 per cent record. Fiji beat South Africa 29-17 in the cup final.

Fueled by the support of an appreciative crowd, Kolinisau, Tuwai, Masilevu and player of the tournament, Samisoni Viriviri, inspired the islanders to victory.

The emphatic victory handed a third Dubai 7s cup title in four years to coach Ryan, and his fi rst piece of silverware for Fiji, which sat four points behind the NZ 7s with South Africa a further point back in third. Ryan said he had seldom seen his side play so well. He added, “Kolinisau has been a brilliant captain.

I had to keep them level-headed after the semis, but I didn’t need to do anything. They were humble and ready to go. We were in control today and it’s just great. We have amazing talent on the islands and this is the start for us. We need to build on that. I have never seen a game of 7s like the one we did in the semi-final.”

In the third place play-off, the All Blacks 7s beat England 17-14. The Los Pumas collected plate in Dubai after beating Wales 21-5, while Australia came from 5-0 behind to beat Portugal 17- 12 in the bowl final.

France also came from 12-0 behind to beat Spain 28-17 and pick up the fi rst silverware. Fiji wins in emphatic style After winning the 2014-15 HSBC WRSS overall crown, Fiji was fast becoming the most feared nation on the circuit.

Finishing the 2014- 15 season on top of the ladder with four tournament wins, the Pacifi c Islanders came into the fi rst leg of the new season with a reputation to maintain.

Fiji beat England 28-17 to win the Dubai 7s tournament. After winning the tournament, Kolinisau said; “It is an amazing feeling when you get to win a tournament, especially in Dubai in front of so many fans. There’s a feeling of relief in the team. The game of 7s is getting hard. There are no easy games ahead and we’re grateful to have won here.”

Fiji earlier overcame NZ 19-5 in the semis, while England beat the United States 24-19.

The Americans, who upset NZ in the group stage, repeated the feat by defeating them 31-12 in the third-place playoff. Facing Australia in the quarters, Fiji lit the Sevens Stadium ablaze with some exciting tries. Fiji went on to win the match 19-12, dashing Australia’s hopes of a tournament victory.

The Fijians, who conceded an early try to Tom Bowen, rushed in four tries in the three minutes before halftime. Savenaca Rawaca burst past two defenders to storm in for our fi rst try. Jasa Veremalua and Isake Katonibau followed in quick succession from the kick-offs, and then the man-of-the-tournament Jerry Tuwai, after the halftime hooter, stepped out of a crowd of defenders to sprint free.

He was clobbered just before the posts, but managed to sit up and plunk the ball down. Vatemo Ravouvou converted all four tries, and the result was effectively certain. Tom Bowen scored a second try for England in the last spell, and then Phil Burgess went over in the last minute.

Ben Ryan tasted victory in Dubai for the fourth time in six years as he saw his side in scintillating form all day. The win put Ben Ryan’s side on top of the series standings with 22 points, ahead of England (19), USA (17) and the All Blacks 7s (15). Ryan was delighted with his team efforts, hailing Fiji as the benchmark for sevens excellence.

He added, “We are ahead of the curve now compared to other teams and they will look at us now and try and work out how to negate that. But it’s a tough assignment for them because as soon as they take their eye off what they are doing in order to nullify us then we are able to create this aura about us.”

A big vinaka vakalevu to our legendary sports writer, Maikeli Seru, and his team for creating the ideal hype! The Fiji Times will provide all the latest updates from Dubai via its online service.

I thank Fiji One for bringing the tournament live, and for bringing smiles to thousands of Fijians who will watch the two-day tournament free and live. Our prayers and support with the team.

 RAJNESH LINGAM is a contributor to this newspaper. The views expressed are his and not necessarily of this newspaper or his employer.