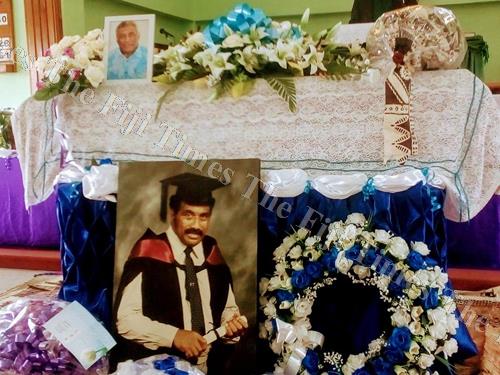 A photo of Nimilote Ratudina beside his coffin during his funeral service in Nasole, Nasinu on October 10. Picture: SUPPLIED

A person is known and forever characterised by the actions he or she does in his or her life.

As i-Taukei, we dedicate our lives vastly to the three main pillars which form our society – vanua (land), lotu (religion) and matanitu (government).

Nimilote Ratudina was one of the many who believed and dedicated his life to that belief.

His contribution to the vanua came through his rugby talent. He was a Fiji 15s elite rugby player who represented Fiji 31 times.

His rugby pals named him as the ‘Gentle Giant.’

He dedicated his life to the lotu by becoming a chief steward within the Methodist Church in Fiji and Rotuma.

And he dedicated his life to the matanitu by dedicating his life as an educator – a calling he held until his passing. This is his story.

Ratudina, from Beqa Island, was laid to rest on his island home on Fiji Day.

He was 72 and is survived by his four children, 12 grandchildren and eight great-grandchildren.

It was there where he found a passion in carpentry which he would later pursue and make it his life’s work.

But like every young Fijian back then, rugby was the prized sport of which every boy wanted to play.

Ratudina played for the Suva Young Boys Rugby Club and then the Castaways Rugby Club where he was noticed and called up for national duty.

He is a Flying Fijian number 241 in the Fiji Rugby Union record and played prop forward.

He earned his first cap for Fiji in 1972 against Tonga at Nuku’alofa.

Ratudina played 31 games for Fiji between 1972- 1979, including tours with the Fiji team to Tonga, Wales, Ireland, England, and Canada.

The epitome of his rugby career was being part of the Pio Bosco-captained side that defeated the British and Irish Lions at the then Buckhurst Park in Suva in 1977.

After ‘hanging the boots’ in the early 1980s, Ratudina continued in education.

He had a Teachers Diploma from the then Fiji Institute of Technology before leaving Fiji for Australia.

Ratudina dedicated his life to the Fiji National University where he worked as the Head of School for Building and Civil and Engineering and later the College of Engineering, Science and Technology.

Ratudina was a stalwart member of the Methodist Church in Fiji and Rotuma and used his profession to help build official residences of church ministers in Nasinu, Makoi and Ba.

The’Gentle Giant,’ in his glory days of rugby, was a man of little words, but was known for being straight to the point.

The smaller players would use Ratudina as a shield when moments in a match intensified or at heated moments.

This is on and off-the-field, Tikoisuva said. ‘Bosco’ and the late Ratudina are the Fijian lion slayers together with their 1977 teammates.

It was a tie formed from the rugby paddock.

But it was his friend’s journey to fulfil the three pillars of an Itaukei contribution to his home, village, and country and his belief in what he could do for his country as in the words of the late President Kennedy.