A design for Times 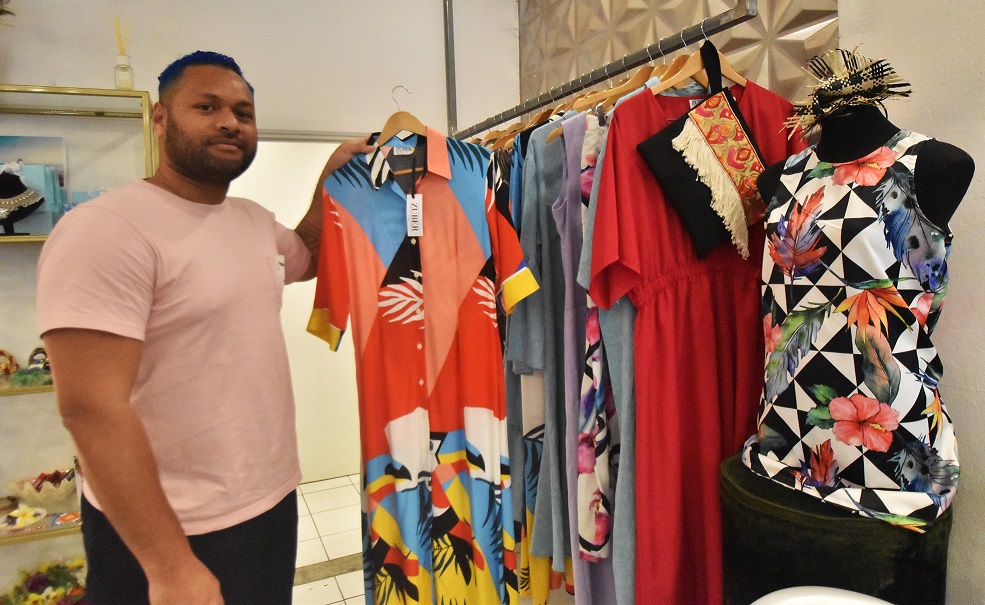 Ilai Jikoiono was the designer behind the Fiji Times staff new uniforms which was launched during the company’s 150 anniversary celebrations this year. Picture: RAMA

DESIGNING uniforms usually involves a lot of intricate planning to properly represent a company’s values to the public.

Ilai Jikoiono was the designer behind The Fiji Times staff new uniforms which was launched during the company’s 150th anniversary celebrations this year.

According to him, the new uniform reflected the company’s history with elements used from Fiji’s native plants to give an aesthetically pleasing look.

“So I met Christine Lyons (general manager for Fiji Times Pt Ltd) and Annie Robinson (marketing manager) and they were going over how they spoke to your graphic designer and they had a few ideas using your 150-year-old newsprint,” he said.

“They wanted to keep it corporate but wanted to make sure that it had a bula theme as well,” he said.

He said the leaves which were added to the uniform are commonly found around the country with inspiration coming from other designers. With keeping the design aesthetically pleasing, they wanted to complete people who were plus-sized as well.

“Black is flattering on any shape and any size, so I sent them the white version and they decided this was it.”

He said they later requested for the black version which was agreed to be the best one. For most designers, when clients bring in their ideas or briefs on what they actually want made it is easier for them to actually carry out the work.

“Usually when I have our meetings for making uniforms it’s always easy when the clients are quite specific. “So that is a great starting point for the designers,” he said.

Mr Jikoiono has his collection at Zuber — a boutique store located in Suva where they look into bridal, prom and evening wear.

According to him, sometimes the clients who want their pieces made are not sure as to what they want.

“So we normally like to start off what they are comfortable with, if they want to show their arms or do they want it fitted.

“We have the local clients but at the same time we have a lot of interest from the expatriates as well. At the moment we like to explore with mixing fabrics together and prints as well.”

The boutique has a wide range of customers who have a modern and conservative style.

“We also have some clients who need office wear then we do have a bit more conservative pieces as well,” said Mr Jikoiono.

He said most would not realise when it came to short-sleeved clothing most clients at a certain age did not like to show their arms.

Therefore, they are shifting more focus into the conservative wear and incorporating the materials and designs into that.

He said these clients often felt they had aged in certain areas of their body such as their arms, legs and chest.

“Then we get some who are very confident and are the complete opposite,” he said.

“Something that we noticed was that the conservative style was more common and it does cost a lot more because of the fabric that is needed.

“But we noticed our clients don’t mind paying extra.”

He said these clients were not conservative because of their religion or their families, but it was something which was more of a personal preference because they felt like they didn’t want to show for example their arms.

Mr Jikoino started from small beginnings and carried out small orders as very few people knew he was a designer.

His first collection which was a 15 piece was sold out in two weeks in 2016.

“That was with the House of Design, that was the shop that was started by Faraz Ali and Zelda Thomas, they started the shop together and I had a little space in it.

“We used to have other designers in the shop and then we decided to r-brand it and call it Zubar.

Mr Jikoiono went from receiving custom orders to designing uniforms for companies around the country.

“At the moment we have the New Zealand High Commission uniform that we are working on, we have the Asian Development Bank uniform, also we got contacted with Prouds to release a line that is exclusive to them.”

He said the orders for designing uniforms went hand to hand with the business as it was a good way to keep the business going, especially when the big events were over and there aren’t many custom orders.

“So now with our uniform orders that are finishing, we have our forums that are coming up and weddings are coming and events where people need custom-made dresses.”

He added the textile market in the country was not big enough and there was a lack of skilled people who could produce high end gowns.

He added they also had to keep up with the style and demands of customers as well which was good for the business in terms of innovation.

“Our market is quite different as some of our clientele is quite conservative and you can’t shift them out of it,” he said.