A day of upsets on day one in Cape Town 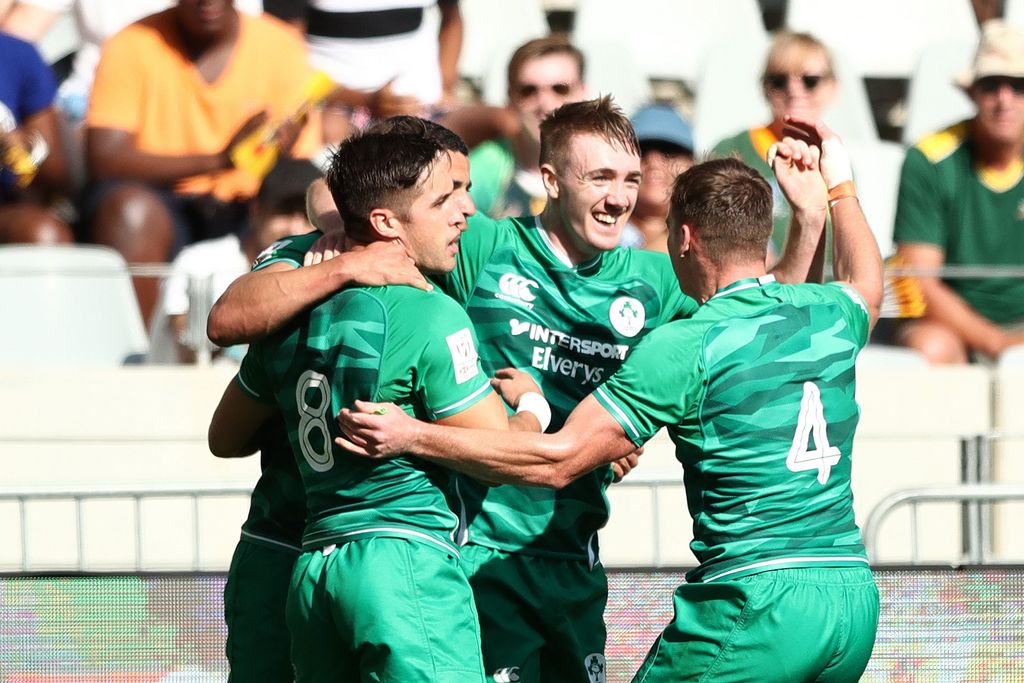 IRELAND and Scotland snatched last-gasp victories over Australia and England respectively on the opening day of men’s pool matches at the HSBC Cape Town Sevens, while Kenya were also surprise winners over Samoa.

South Africa brought the curtain down on day one with a scintillating 49-0 defeat of Japan, while their Pool A rivals Fiji were 28-14 winners over USA despite having two players sin-binned.

New Zealand, the most successful team in series history in South Africa, were equally impressive in overcoming Wales 43-7 after their Pool B rivals Argentina had conceded two late tries in a 33-21 victory over Canada.

While these victories may have been largely expected, the men’s competition at Cape Town Stadium had begun with three shock results in four matches with Dubai bronze medallists England among them.

England suffered a last-gasp defeat in their Pool C match with Scotland, Femi Sofolarin scoring the winner in added time of a pulsating match between two old rivals that ended 26-24.

Australia were also undone by a final play try, Terry Kennedy racing away to secure a 26-21 victory for Ireland against a side that had put 45 points on them in Dubai last weekend.

The other upset saw Kenya beat Samoa 24-19, while France avoided joining this club with a 40-7 defeat of Spain.

The men’s action continues at 10:57 local time (GMT+2) on Saturday when Australia take on Kenya in Pool D. The teams will complete their pool matches on day two with the knockout stages to bring the curtain down on the historic tournament on Sunday.

The most mouth-watering game on day one was unquestionably the meeting between Fiji and USA, the top two in the 2019 series. Sevuloni Mocenacagi was stopped a metre short of the USA line, but two quick tries from Aminiasi Tuimaba gave Fiji a 14-0 lead at half-time. Two yellow cards in little more than a minute threatened to undo all of Fiji’s hard work, but tries from Viilimoni Botitu and Alasio Naduva ensured Jerry Tuwai’s 50th series event began with a 28-14 win.

South Africa ensured the crowd went home happy with a seven-try, 49-0 defeat of invitational side Japan in the final game of the day. Seabelo Senatla and Kurt-Lee Arendse both scored doubles as the Blitzboks made Japan pay for every error, pouncing on loose passes, dropped balls or poor restarts. Japan did have plenty of time on the ball, but simply couldn’t find a way through the green wall.

Argentina belied the loss of captain Santiago Alvarez to injury before the tournament began with an impressive 33-7 defeat of Canada, making full use of perfectly-weighted kick-throughs with Franco Sabata (2) – the top scorer in Cape Town last year – and Francisco Ulloa both touching down from this tactic. A Theo Sauder double cut the deficit to 33-21 at the final whistle but Argentina were fully deserving of their victory.

New Zealand ensured that Sam Dickson’s first match in his 50th series tournament ended in victory with a 43-7 defeat of Wales. From the moment Andrew Knewstubb sold the Welsh a dummy for the opening try, there was little doubt that the All Blacks Sevens would come out on top with Akuila Rokolisoa scoring two of their six other tries.

France were determined not to be the victims of a third shock result in a row and didn’t look back after Tavite Veredamu and captain Jean Pascal Barraque gave them a 14-0 lead. Spain did get on the scoreboard through Ignacio Rodriguez-Guerra but four second-half tries – including Pierre Gilles Lakafia’s 50th on the series – saw Les Bleus run out 40-7 winners.

England and Scotland encounters are always hard-fought battles, whatever the teams playing, and this was certainly no exception. Captain Robbie Fergusson put the Scots ahead while Dan Norton was in the sin-bin, but the all-time series top try scorer atoned with his 344th try on the stroke of half-time. The pulsating second half swung one way then the other, England scoring twice before Scotland hit the front with their own double. Harry Glover thought he had scored the winning try, only for Sofolarin to stretch out to score that for Scotland with the final act, ironically against the side he played for last season.

Ireland ensured that the men’s competition got off to a surprise start when Kennedy scored with the final play to snatch a 26-21 victory over Australia, their biggest scalp as a core team on the series. Australia had led 14-7 at half-time before Ireland charged back with two quick-fire tries, the latter by captain Billy Dardis. Joe Pincus’ second try tied the scores with only seconds to play, but Australia then lost Lachie Miller to the sin-bin and Kennedy burst through to run in the winner.

Samoa had finished fourth in Dubai last weekend, but it was Kenya who started the brighter with three first-half tries, including one by Daniel Taabu almost three minutes after the clock hit zero. With Belgium Tuatagaloa and Paul Scanlan in the sin-bin at the same time, Billy Odhiambo seemingly put the match beyond Samoa, but Tuatagaloa and Joe Perez scored what could be key tries later in the tournament to cut the final margin to 24-19.