A ‘culture of dishonesty’: So who should fix that 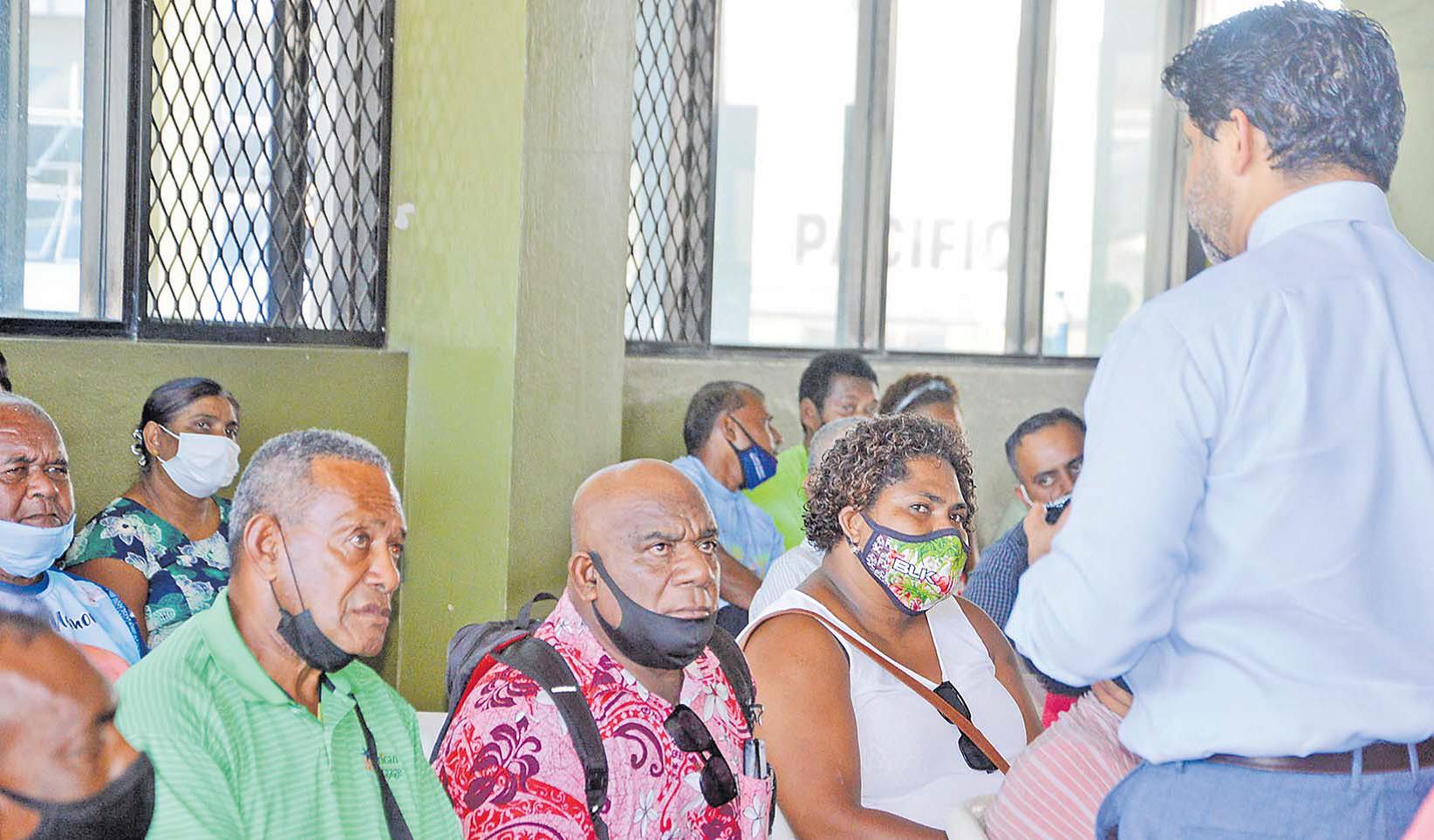 The eyes say it all ... members of the public listen to what the revised 2021/2022 National Budget has to offer to them during the consultations in Lautoka. Picture: REPEKA NASIKO

One has to assume that Minister for Economy Aiyaz Sayed-Khaiyum’s travelling roadshow for “budget consultations” will soon come to an end and he will actually sit down in Suva and write his mini-budget.

The “consultation” parts of the “consultations” – that is, the point where the Economy Minister actually puts down his microphone and listens – don’t appear to be going all the Government’s way.

For example, he appeared to be surprised to hear that the streets of Nausori were overrun by drunks and drug dealers while the police did nothing.

If of course he could bring himself to read The Fiji Times of about a year ago, he would have found all the news right there on the front pages.

Or if his government allowed town and city councils to hold elections he would be hearing from the Nausori councillors regularly because they are elected to give voice to the concerns of people of the town.

Health Minister Ifereimi Waqainibete seemed equally shocked to hear that no doctors turned up to treat a 75-year-old man at Nausori Health Centre.

His grandson had to pay for a private doctor to treat him the next day.

Someone should be disciplined, the Minister said.

Well that might make the Minister feel better, but it does nothing for the patient!

In a “true democracy”, of course, people would not be afraid to be raising these concerns publicly and shaming public officials into changing their ways.

At an earlier “consultation” a man complained about why he hadn’t received a Covid relief payment.

The Economy Minister said that the Government had to be careful about who it gave the money to because there was a “culture of dishonesty” in Fiji and everyone was trying to get money they shouldn’t get.

Anyway, as it turns out our Economy Minister probably won’t have to worry too much about anyone criticising his mini-budget because no-one will get the chance to even properly read it.

Apparently Parliament has decided that the minister will present his mini-budget on the night of Thursday, March 24 and it will then debate it – for one day – on Friday morning.

The Opposition said this was not enough time to review the document and properly consider it.

Aiyaz Sayed-Khaiyum’s response, at a “consultation” meeting in Nadi, was “tell them to come to Nadi”.

That statement is even more arrogant than we are used to from him.

He treats the very Parliament that he says delivers “true democracy” as a box-ticker and cheerleader.

Opposition Parliamentarians – who represent 49.98 per cent of the voters in the last election – are treated like dirt.

And after all, as we now know, there won’t even be a proper parliamentary vote on the mini-budget.

The Speaker has ruled that Parliament is not even allowed to count who votes in Parliament any more; he will decide which side has won after he hears them shout “aye” and “no”.

All this has happened in the same week that the Government denies it is buying “likes” for its Facebook posts.

They may be right – it is probably the FijiFirst party buying the likes instead.

It has plenty of cash and you can buy likes for two American dollars per hundred.

Because the Government apparently can’t explain however, how a highly “international” cast of hundreds of people nobody ever heard of from India and Turkey and Myanmar keep commenting “good job” and “good work” on Government posts.

Or why, if the government post is shown to have 30 comments, all of them seem to have been deleted (except five
highly complimentary ones).

This is the same Government that earlier this year posted a picture saying the Prime Minister was visiting a roadblock when it turned out the picture was 10 months old and he was nowhere near it.

And yet it is the people of Fiji, apparently, who are being lectured on our “culture of dishonesty”.

Statements of this kind tell the story of this government.

It is obsessed with the idea that everybody, everywhere, is always trying to cheat at something, or get an unfair advantage.

Meanwhile, it seems to think nothing of the fact that it can legally use the rules of Parliament to vote its own ministers’ salaries and travel allowances that are astronomical compared to those of previous governments.

So, to state its desire to stamp out anything it can label corrupt, abusive or dishonest, those of us who are honest and
just want to get on with our lives are all, instead, regulated within an inch of our lives.

There has been virtually no voter fraud in our past two elections – yet everyone is treated as a suspect and everyone
has to re-register to blue cards and now to have names which match their birth certificates, come what may.

Try to get anything out of a government department or statutory body and you have to constantly run around for
birth certificates, TIN letters, tax compliance certificates and official stamps.

And how does all this work out?

Rich people pay others to do this running around for them.

People who have smartphones and bus fare can top up their phones and e-tickets and fill out e-forms and turn up to where the freebies are being handed out.

The poorest people do not have the time or the money that give them these advantages.

They have to fish or farm to feed their families or to look after their children (or look after someone else’s children).

And maybe one or two of them will cut a few corners because they can’t comply with the government’s hectoring,
finger-wagging, ever-more-complex schemes to deal with fraud and corruption.

And is it only the welfare or the $360 recipients who are dishonest?

You cannot rid society of dishonesty.

There will always be dishonest people who try to take advantage.

As anyone in business knows, it’s like bad debts (which the Economy Minister seems sometimes to confuse with doubtful debts, but that’s another story).

Not everyone will meet their obligations or do the right thing and the honest people will be the ones affected.

So in our businesses plan for that.

People in business don’t make everyone fill out multiple forms and produce three different IDs just to do business with us.

That just means that, to avoid the inconvenience, they will take their business somewhere else.

So why does the Government not understand the real world like the rest of us?

Why do they think they can make everybody perfectly honest by lecturing and threatening and passing laws that say
everyone, for the smallest offence, can be fined $10,000 and jailed for five years?

It’s all about us

And there is another argument to be made about this.

We have a government that is determined to centralise everything, collect all the money and then hand it back out to people on the Government’s terms.

In that way only the government gets the praise for everything, and (it believes) everyone will think it is the best government ever and vote for it forever.

This is not a government that encourages the community to work together to resolve their own problems.

Town and city councils? No.

NGOs who tell the Government their local solutions are better? No.

Because that would only mean the government did not get the credit for the solution.

And who would vote for the government then?

And all of this is to say nothing of the people who seem to be able to lobby the Government for sudden changes in the
rules on, say, capital gains tax.

Parliament barely knew what was happening when the Government rushed the tax law change through under urgency.

Not only are these people able to ask for law changes to avoid paying tax – even if they had to pay tax under the law
before and didn’t pay it, they are suddenly magically excused from paying it.

But of course (a lawyer would argue) – that’s not dishonest.

That’s just about talking to the ministers you can reach and asking them nicely if they would change the law, all legal.

So, all of us who seem to be part of our nation’s “culture of dishonesty” might ask our government some questions about honesty:

 Is it “honest” for ministers to travel around the country, at taxpayers’ expense, talking to people they have barely
talked to for the previous three years and call it “consultation”?

 Is it “honest” for a string of more government ministers to burst into the countryside throwing around taxpayer-funded boats, tractors, pumps (even a stray horse) in a year when everyone knows there will be an election?

 Is it “honest’ for the Government to use the “Fijian Government” Facebook page to only show FijiFirst party ministers travelling around the country giving out freebies, or to attack opposition parliamentarians?

 Is it “honest” for the Government, on the same Facebook page, to arrange (whether it pays for them or not, or gets
someone else to pay) for “fake likes” which pretend the government is more popular than it is?

 Is it “honest” for the Government to delete comments on its Facebook posts that criticise its actions? Shouldn’t the people of Fiji be entitled to know, on the Facebook page they pay for, what their fellow citizens think?

 Is it “honest” for the Government to support and promote a system of parliamentary voting where nobody even
counts who said “yes” and who said “no” to any new law or other parliamentary motion?

And if the answer to any of these questions is “no” – then where should we start in ending this “culture of dishonesty”?

 RICHARD NAIDU is a Suva lawyer. Even then, he tries to be honest. The views expressed in this article are not necessarily those of The Fiji Times.