A champion of the poor – A tribute to Father Kevin Barr 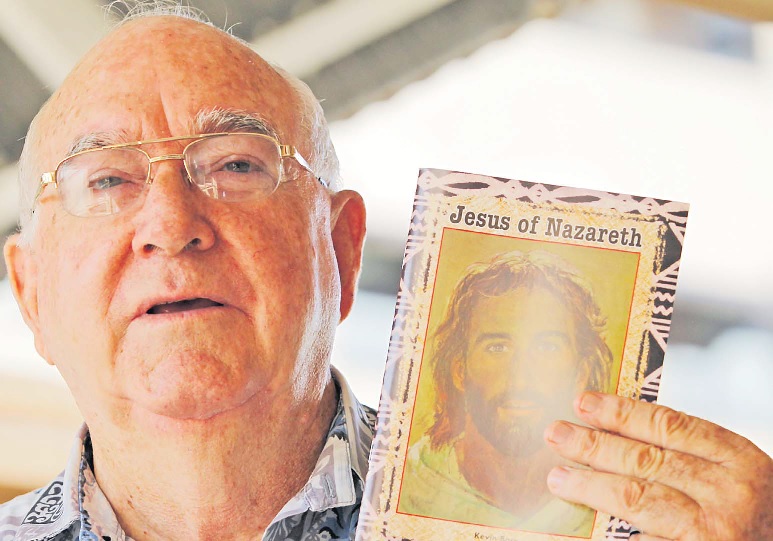 Father Barr is a strong believer in God who hears the cry of the poor and wants to transform the world.

Father Barr’s life can be summed up in a commitment to the God of the poor, justice, love and peace.

He radically follows in the mission of Jesus.

Jesus and the world Jesus makes it very clear to us that his mission is to announce and bring about the Kingdom of God.

Father Kevin Barr: Being Church in the World In his book “Lets Change the World” (1994) he states that God wants us to change the world.

To change the world to be the place that God wants it to be.

It is the old world transformed anew. Consequently, the church must take up God’s mission.

We must work for justice, love and peace here and now.

The church seeks to guide us as a mother regarding our response to the social problems of our changing world. The church must be enthusiastic about changing the world.

Along the same vein, Jesuit and Asian theologian Aloysius Pieris states “the world sets the agenda for the church”.

Father Barr dedicated his life to works of charity for the poor and underprivileged youths and speaking for justice.

He was instrumental in setting up Chevalier Hostel at Rewa St and Chevalier Training Centre at Wainadoi.

He helped set the Ecumenical Centre for Research Education and Advocacy.

He provided his service to the government as the sociologist of the Electoral Boundaries Commission, chairman of the Wages Council and member of the Housing Authority and Public Rental Board.

He was consultant for Pacific Community Network before he died.

Critical analysis of the world To change the world, we must critically analyse it.

Father Barr states “we need to analyse our societies and our cultures and see what is going on below the surface. Are the values we live by the values of the Kingdom? Are the policies of our governments in line with the vision of Kingdom”?

Monica Helwig is one of Father Barr’s favourite theologian. In her book “Jesus the Compassion of God” (1983), she writes: “What made the teaching of Jesus different and apparently so hard to accept then as now was that it required a critical assessment of the structures and values and attitudes of human society which his listeners and followers were a part of.

“It required an acknowledgement of the inauthenticity, the selfishness and the destructive character of one’s own mode of articulation into the society.”

Father Barr argues that “we need to be able to look objectively at our society — its values, its attitudes, its structures, and be able to critically evaluate them in order to assess their strengths and weaknesses.

This means that we will need a ‘conversion’ an ability to see things differently and face up to the truth”.

This is why Jesus says: “Repent (change) for the Kingdom of God is near at hand”.

In an unpublished article “Reading the Signs of the Times: Being church in the World 2014, Father Barr writes “the church must be the conscience or moral compass of society. … The church sees society through the eyes of God. What is God saying to us about our situation”.

He took seriously the words of St Pope John XXIII: “To read the signs of the times and interpret them in light of the gospel.”

To help read the signs of the times, Catholic Church uses social analysis and the pastoral circle.

The Catholic Church added a prophetic dimension (Bible and theological reflection) to the see judge act.

Today it is commonly known as the pastoral circle.

The pastoral circle is used by Christian organisations to help them effectively address social problems.

He states that social analysis is an attempt to get to the root causes of what is happening in the world around us.

It asks questions about society and seeks answers. It asks the “why of the what”.
By analysis we mean various things:

Social analysis is a tool or method for analysing the society in which we live and the  problems we face so that we discover the root causes of those problems.

It is a divine coincidence that the two events took place close to Father Barr’s passing:
1. Social Analysis Course at PTC; and
2. KATOLIKA TV: Faith in the World – A

Catholic TV program on Fiji One TV: A dialogue between faith and the world.

Both take on the spirit of Father Barr’s work.

Father Barr argues that “if we want to do social analysis we don’t need a degree in sociology, but we must develop a critical mind.

A critical mind is a mind that asks questions and keeps asking questions and is not satisfied with easy answers. The most important question is why and we need to keep on asking why”.

Father Barr is an orthodox Catholic-Christian.

He is faithful to Jesus, the Bible, and the church’s tradition.

He is also ortho-praxis – he wanted to follow Jesus correctly.

We need both; orthodoxy and ortho-praxis.

To be faithful to the Christian faith and to act correctly.

The prophet Micah teaches: “He has told you, O man, what is good; And what does the LORD require of you But to do justice, to love kindness, And to walk humbly with your God? (Mic 6:8)

Father Barr has gone to receive the crown of righteousness that God has prepared for those who lived a justice and righteousness.

Paul’s letter to Timothy: I have fought the good fight to the end; I have run the race to  the finish; I have kept the faith; all there is to come for me now is the crown of uprightness  which the Lord, the upright judge, will give to me on that Day; and not only to me but to  all those who have longed for his appearing. (2 Timothy 4:7-8)

Go Father Barr! Go, run to your God! These were the encouraging words of Sr.

Esther Powell as we accompanied Father Barr from life in this world to eternal life.