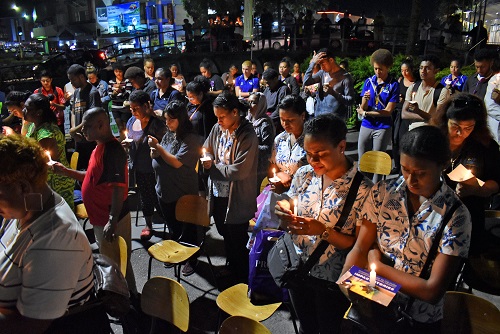 Members of the public light candles during the prayer vigil at Terry Walk in Suva on Tuesday, September 10, 2019. Picture: JONACANI LALAKOBAU

FIJI recorded 88 suicides and 82 attempted suicides from January to August this year.

This was revealed by Lifeline Fiji officer in-charge Jeremiah Merekula who said of the 88 suicide cases recorded this year, 53 were males and 35 females.

He said last year a total of 115 suicide cases were recorded by the Fiji Police Force and the number of suicides had increased every year.

Mr Merekula said of the 88 completed suicide cases this year, 68 of those people who resorted to taking their lives were above the age of 26.

He also highlighted that in Fiji, every 36 hours someone attempted suicide.

“The number keeps on growing, for example in 2018 we only had 28 completed cases of suicide with females throughout the year,” he said.

“Today it stands at 35 completed cases of suicide.

“When someone commits suicide, people around him or her are more vulnerable in attempting complete suicide.”

He said Lifeline Fiji had received about 1500 calls from January to August this year.

“What we have seen over the months is that the calls fluctuate.

Last night, in light of World Suicide Prevention Day, Lifeline Fiji organised a vigil ceremony to commemorate those who had committed suicide and also to show support to those who had survived suicide.

Mr Merekula said one of the key aspects of awareness was focusing on families and highlighting the importance of understanding and knowing the crisis each person went through.

“To us it is really important to have these vigils, to let families who had completed suicide that we stand with them and to also let them know that there are services available that they could reach out to when they go through certain emotional feelings, thinking of their loved ones who had committed suicide.”

If you need someone to talk to, you can always contact Lifeline Fiji on 132454.