800 officers to move to community posts 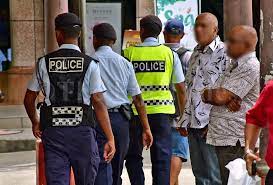 More than 800 police officers will be moved into various community posts as part of the Fiji Police Force community policing restructuring reform.

This was highlighted by Assistant Commissioner of Police (ACP) Aporosa Lutunauga.

He said this while responding to Standing Committee on Foreign Affairs and Defence deputy chairperson Salik Govind’s question on whether any assessment had been done to gauge the impact of community policing.

ACP Lutunauga said key performance indicator (KPI) has spoken for itself — they have managed to reduce crime.

“Overall offences, we’ve reduced in this particular year with only the exception of the crime against women and children, so that is a result of our community policing program,” he said.

He also said the DUAVATA Policing Program was an acronym “which basically means Drawing Unity Amongst Various Agencies Through Acceptance”.

ACP Lutunauga said a recent DUAVATA community policing program on Kadavu resulted in the apprehending of a teacher in a sex-related case.

“So it is giving us the result that we want but we still need the support of the people in the battle against crime.”

He said a review was done on the program during a Community Policing Symposium and this resulted in the appointment of community coordinators for the various divisions.

“Now as part of restructure and reform, the Commissioner of Police has approved that we are going to move over 800 men to the community posts.

ACP Lutunauga said this would help create a partnership with members of the community and ensure increased safety and security.