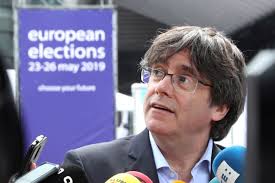 BARCELONA (Reuters) – The Spanish government has violated the rights of three Catalan leaders elected to the European Parliament by blocking them from collecting their credentials, 76 MEPs said in a letter sent to the governing body of the European legislature on Monday.

The legal rights of those Catalan separatists elected to office while on trial or wanted for arrest for their role in a failed 2017 secession bid have been a major headache for Spanish courts since elections in April and May.

MEPs from a range of parties, in a letter seen by Reuters, called on the European Parliament to protect the rights of the three Catalan leaders who were unable to collect their credentials on Monday. As a result they will not be able to take their seats or claim the immunity the office provides.

“It is clear that the intention of these decisions are to prevent the concerned MEPs being granted all the rights and freedoms as European representatives and, at the same time, to avoid any debate in the European Parliament that might put into question the judicial trial against the Catalan political and social leaders,” the letter said.

Last week, a Spanish court ruled that Oriol Junqueras, who is in prison awaiting sentencing in a high-profile trial on Catalonia’s 2017 independence bid, would not be allowed to leave to pick up his credentials.

Two other leaders, Carles Puigdemont and Toni Comin, who have lived in self-imposed exile since warrants were issued for their arrest after the failed secession bid, were unable to obtain their credentials in Madrid without risking detention.