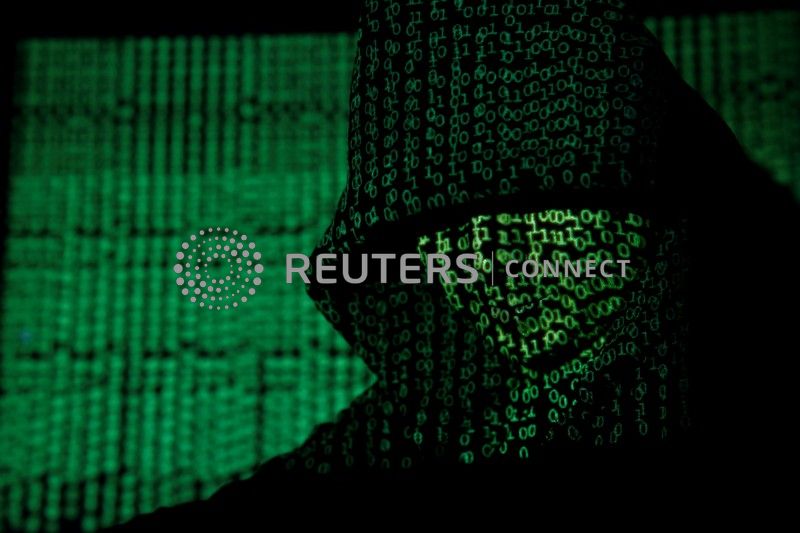 A projection of cyber code on a hooded man is pictured in this illustration picture taken on May 13, 2017. REUTERS/Kacper Pempel//Files

LONDON (Reuters) – Up to 50,000 companies running SAP software are at greater risk of being hacked after security researchers found new ways to exploit vulnerabilities of systems that haven’t been properly protected and published the tools to do so online.

German software giant SAP said it issued guidance on how to correctly configure the security settings in 2009 and 2013. But data compiled by security firm Onapsis shows that 90 percent of affected SAP systems have not been properly protected.

“Basically, a company can be brought to a halt in a matter of seconds,” said Onapsis Chief Executive Mariano Nunez, whose company specialises in securing business applications such as those made by SAP and rival Oracle.

“With these exploits, a hacker could steal anything that sits on a company’s SAP systems and also modify any information there – so he can perform financial fraud, withdraw money, or just plainly sabotage and disrupt the systems.”

SAP software is used by more than 90 percent of the world’s top 2,000 companies to manage everything from employee payrolls to product distribution and industrial processes.

Security experts say attacks on those systems could be hugely damaging, both for the victim organisations and their wider supply chain. SAP customers collectively distribute 78 percent of the world’s food and 82 percent of global medical devices, the company says on its website.

Sogeti security consultant Mathieu Geli, one of the researchers who developed the exploits released online last month, said the issue concerned the way SAP applications to talk to one another inside a company.

If a company’s security settings are not configured correctly, he said, a hacker can trick an application into thinking they are another SAP product and gain full access without the need for any login credentials.

SAP said customer security was a priority and the vulnerabilities showed the need for clients to implement recommended fixes when they are released. “Security is a collaborative process, so our customers and partners need to safeguard their systems as well,” it said in a statement.

Researchers at Onapsis said on Thursday they were naming the exploits “10KBLAZE” because of the threat they posed to “business-critical applications” which, if hacked, could result in “material misstatements” in U.S. financial filings.

Nunez said he would share his company’s ability to detect the vulnerabilities with other security vendors to help secure all SAP users against possible future attacks.

Sogeti’s Geli said he created the exploits to prove the danger of the vulnerabilities and released them online in order to help experts test the security of SAP systems.

He said there was a risk they could be used by malicious actors but not people without technical ability, and it was more important for companies to update their security settings.

“We are just pointing out something that is already fixed for SAP but clients maybe are a bit late on,” he said. “We are trying to push that and say: ‘Guys, this is critical, you need to fix it.”