$50,000 boost for Manu Samoa ahead of Pacific Games, World Cup 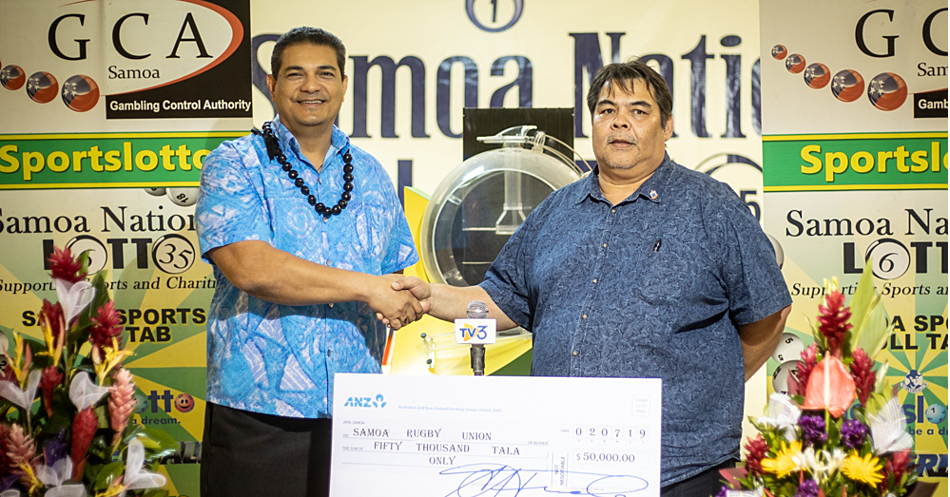 The presentation was held at the Samoa Sportslotto building at Savalalo.

The donation was collected from Sportslotto’s $2 pull tab promotion.

Falemavaega, on behalf of the Union, acknowledged the assistance.

“Preparing the team is quite a costly exercise and that’s why the union is relying on sponsorship and the Government, which they have in the past continuously contributed in funding the rugby union.

“It’s always a financial challenge for the Union every year,” he said.

SRU is also planning a Radiothon on July 24 to get the public to support the Manu Samoa team.

Falemavaega said Manu Samoa is gearing up for the Pacific Nation’s Cup on July 31 against Tonga, which is the only match the team will play in Samoa this year.

Manu Samoa head to Fiji straight after to play against the Flying Fijians in Suva. They return home for five days before an official farewell as they head to Auckland, New Zealand to play the All Blacks and then meet the Wallabies a week later in Sydney.

The team was announced last week and will meet in Auckland to undergo medical checks and so forth before they travel to Samoa.

Tuala acknowledged the support of their customers for buying the Samoa Sportslotto pull tab, which he said will not only support the Manu Samoa but give customers the chance to win numerous prizes worth $20,000 tala.

Prizes up for grabs include a Manu Samoa jersey, a Gilbert rugby ball and a chance to win a trip for two to watch Manu Samoa play the Flying Fijians in Suva, Fiji.