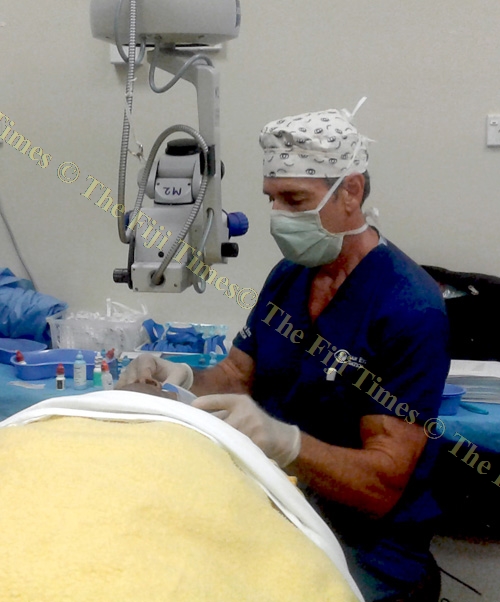 Dr Jeffery Rutgard operates on an eye at the Taveuni Hospital in Waiyevo earlier this week. Picture: SERAFINA SILAITOGA

THE annual Taveuni Eye Project resulted in 403 eye surgeries performed last year within 12 days or an average of 33 surgeries per day.

Out of the 403 surgeries held at Taveuni Hospital in Waiyevo, 345 people’s eyesights were restored.

Organised by volunteers of the Rotary Club of Taveuni, this year’s project started this week and about 500 patients are expected to be treated.

Club president Geoff Amos said the support from international and local donors had helped them over the past 12 years.

“Last year, we prepared 7521 meals for the patients and this included three meals for the duration of two weeks and everything was free,” he said.

“Our patients come to this operation with only their clothes and they don’t pay for anything at all, not even their bus or boat fare. “On the first day of surgery this week (Monday), 37 patients had their lost eyesight restored and we expect more to happen this week.”