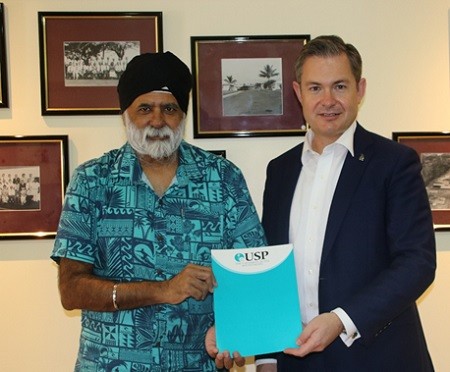 THE partnership between the New Zealand government and the University of the South Pacific – headquartered in Suva, Fiji – has been further extended, offering a platform for a NZD$5.15million (approx FJD$7.40m) funding that will allow USP to deliver its core business up until December 31 this year.

The agreement that extends the present relationship was signed at the Laucala Campus last Thursday, February 7, 2019.

This means USP can continue to deliver by implementing USP’s Governing Council – mandated strategies as set out in its Strategic Plan 2013-2018 and 2019-2024, and associated budget(s) in the period commencing on the signing of that arrangement.

Additional funding of up to NZ$100,000 (FJD$ 143,797.68) has been provided – under the Emergency Priorities Fund – for the institution to undertake small-scale activities to investigate proposed changes to the USP Strategic Plan 2019-2024 or to progress emerging priorities through this year.

“We are absolutely committed to supporting USP through this transition and to continue to be a partner to this institution in the future,” New Zealand High Commissioner to Fiji Jonathan Curr said.

Acknowledging USP’s tremendous value to the region, Mr Curr noted its vital importance as a CROP (Council of Regional Organisations of the Pacific) agency.

“… It plays an extremely important role in preparing the Pacific region to face the challenges of the future and to deal with the development priorities that the region is grappling with,” he said.

USP’s new vice-chancellor and president Prof Pal Ahluwalia said they were thrilled they could further cement this partnership, and to follow up on recent talks and meet people concerned.

Prof Ahluwalia said there was a lot of excitement within the university and appreciated what the partnership could accomplish.

“We could not have run this university without you and you have been supporting us for many years. Thank you again and I know you (Mr Curr) have personally championed this university, which gives us a lot of confidence that together we can really make a difference in the Pacific,” he said.

At Friday’s (February 8, 2019) media briefing, Prof Ahluwalia told local media that they were partnering with overseas universities, particularly Australia and New Zealand – to be able to provide the best training for its students.

The seasoned Kenyan-born professor and university administrator will be in Monash University in Australia next week to work with people who were helping build USP’s capacity for better teacher training.

And just as pleasant music is to the ears, Mr Curr said Prof Ahluwalia was due for a visit to New Zealand immediately after taking up office, where there were opportunities for talks in taking the partnership into the future.