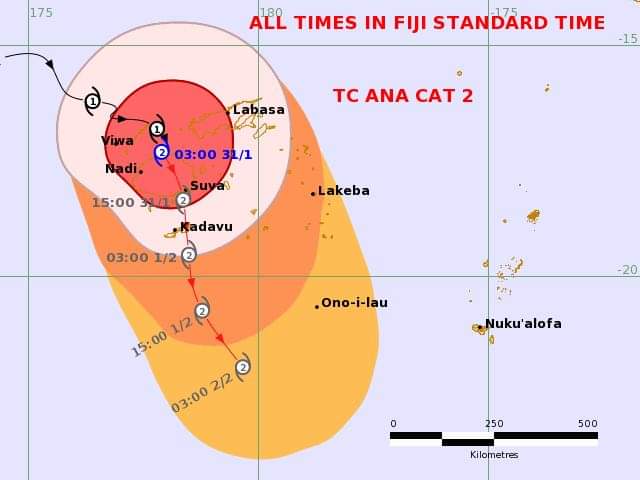 TC Ana has intensified into a Category 2 system. Picture: SUPPLIED

Tropical Cyclone Ana has intensified into a category 2 system over night with sustain winds of about 50 knots (95km/hr) gusting to 70 knots (130 km/hr) near the center along with heavy rainfall and thunderstorms over most places.

According to the Fiji MET Office in Nadi, TC Ana center is expected to be tracking east-southeastwards at about 15 km/hr and exiting the central part of Viti Levu (from Nausori to Pacific harbor) from mid-day to late in the afternoon today and heading towards Kadavu.

For the rest of fiji:
Expect damaging gale force winds with average speeds of 85km/hr and momentary gusts of upto 120km/hr.
Impacts will be minor damages to weak structures, minor damages to houses of very light materials in exposed communities, damages to crops and vegetation with trees tilting due to gales.