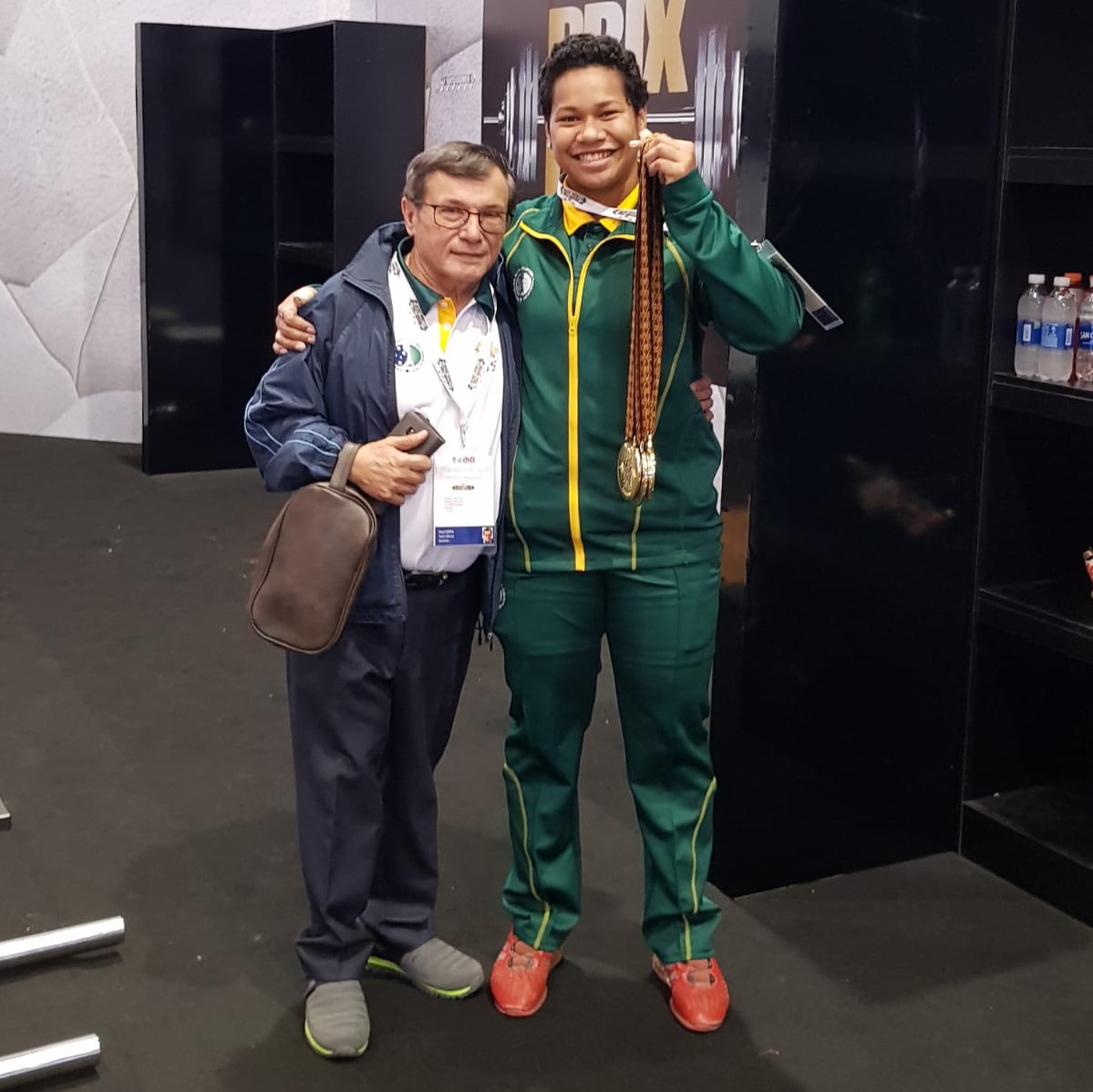 Super Eileen Cikamatana
HEARTIEST congratulations to Eileen Cikamatana for setting a world junior record in Australian colours and securing two gold medals and a silver medal at the IWF Grand Prix in Lima.

It’s a delight to see that our once gold medal prospect is making headlines for her adopted country.

I agree with the comments by Peni Tawai, who is Fiji Weightlifters Association general secretary, that all truth worth fighting for will always blossom with fruits of success.

Eileen has brought joy to the people of Ovalau and to those who share her victory.
RAJNESH ISHWAR LINGAM, Nadawa, Nasinu

Making it big at the RLWC
FIJI has produced big names in the rugby league world. Some have been idolised and rated as superstars in the National Rugby League (NRL) competition in Australia.

I believe whenever the national squad has been assembled, they look seriously good on paper except for the halves pair.

I believe these two positions have been the downfall of the Bati for many years.

Without belittling their commitment, players have failed to impress and live up to the expectations of the number 6 and 7 jersey.

If you watch the past Tests, most tries are scored because of the brilliance of the forwards or outside backs.

It is hardly from the creativity of the halves pair.

The half-back and fiveeight initiate attacks and direct the team’s play.

They are to be very skillful, visionary and tactical kickers.

When the Roosters won the NRL competition a couple of years ago, Cooper Kronk wore the famous No. 7 jersey.

Because of a shoulder injury, he did not make a single tackle in the grand final. His job description for the match was only to orchestrate the attack.

If Fiji has to genuinely make a bigger impact at the next Rugby League World Cup, these two positions have to be sorted out.
MOHAMMED IMRAZ JANIF, Natabua, Lautoka

Attacks on police
ATTACKS on police have been continuous for the past week and despite some arrests, people seem to be taking the law into their own hands.

I believe we need to help the police in whichever way to tackle this issue.

I believe our Parliament should seriously deal with this issue right away and maybe introduce harsher penalties for people who attack police officers.

If anything has to be done to protect our police, I believe it’s now because the festive season is just around the corner and there could be more attacks if nothing is done.

The people we look up to when we need protection are now being attacked, please, let’s support and pray for our police officers for a better Fiji.
TOMASI BOGINISO, Nasinu

Sad society
WHERE have all our good human values gone to? Why are our correctional facilities grossly over-populated? Why has our society become poorer today? Are our levels of arrogance, among certain
groups, taking the better of us?

These are nationally tough questions that must be appropriately answered by all our professional leaders.

Sadly, a Nadi policeman was killed in a hit-and-run accident.

Even more sadly, a policeman, in the course of his duty, was stabbed multiple times in Lautoka.

He paid the ultimate price in his line of duty. In the Capital City Suva policemen were reportedly assaulted.

Now we hear, in the once peaceful former capital Levuka, a group of youths took on some policemen.

Our policemen and policewomen are here to protect us and maintain law and order.

I believe something is seriously wrong among many of our citizens. Our pastors, among all other religious leaders, must address this sad situation with greatest urgency.

Our police force must be respected at all times. Through human rights issues, we learn our police officers are to “dump” their batons because they deliver brute force.
RONNIE CHANG, Martintar Nadi

Revert it to what it was – just have the queens and perhaps it will be manageable.

I have a feeling that the many add-ons are there for people or the organisers egos, well do away with them.

And as Allen Lockington said in a letter that it could be getting old then rename it the Mrs Hibiscus Festival.

Or even Grannys Hibiscus Festival.

Bet let’s bring back the glamour and prestige that the Hibiscus Festival was renowned for.

So many queens became household names after winning the crown. Sadly today it seems to be just another festival where financial profit is the main aim.

I am pleased with the response shown by the sponsors in particular House of Beauty, Damodar Cinemas, Cosette Prouds, and our number one The Fiji Times.

I am pleading with the organisers to make sure that we choose the best who can fly Fiji’s flag proudly in PNG and do us proud.

My best wishes to the contestants who are competing for the Miss Fiji title.

YOUR SAY – Drugs and LTA move

Drug abuse
THE report (FT 13/11) that teenagers as young as 15 were battling substance abuse disorders with a highly addictive drug and also with marijuana and glue-sniffing is frightening.

I believe to become an addict one has to be a user over a long time.

But since new drugs are highly addictive, how long have these teenagers been using the drugs.

Many questions come to mind. Whose children are these? Are they from broken homes? Are they children of drug users?

Are they the children of parents who sent them to families in Suva for a better education and have been neglected?

Once again that question comes up, is the family unit still intact.

We look around us and we see the many religious denominations all preaching the same thing about living a good life.

Education has been made more accessible, we have many organisations protecting the many rights that have suddenly blossomed.

Yet crime, violence against women and girls and drug abuse continue to rise.

We have had to make extensions to our jails.

I ask only one question – where have we gone wrong?
ALLEN LOCKINGTON, Lautoka

Name and shame
THE introduction of the “name and shame” approach by the Land Transport Authority (LTA) for traffic infringements, I think has been a long time coming.

While it may not be well received in some quarters, I think it can be a very effective and powerful deterrent.

Human nature is such that we try to avoid being put in a situation where one will be “named and shamed”.

I am sure we will do all that is possible to ensure it does not happen in the first place, or ever again.

It can be more powerful a deterrent, than the prospect of a prison sentence or payment of a penalty.

I am of the view that we have a good and cost-effective deterrent here, which directly hits hard inside — at a person’s personal pride and integrity.

I think that it should also be extended to many other areas of wrongdoings.

Of course, there are those miscreants out there who will be unaffected by such a move, but I think they will only be outnumbered by those who can be affected.

It’s about time LTA, bravo. If we fully institute this across the board in our society, I’m sure we will definitely see a big difference in the way things are done.
EDWARD BLAKELOCK, Pacific Harbour

Not a reply
DESPITE all the Letters to the Editor, not a reply from the sugar mill about the emission of soot. Not a peep from the Environment Department also.

I’m starting to sound like a chicken with all the peeps. When will someone stand up and be responsible?
ALLEN LOCKINGTON, Lautoka

Drug busts
EVERY now and then there are drug busts which are worth quite a handsome amount. These massive drug busts have not deterred people to continue pushing their luck.

This means there are people among us who are getting “lucky”.
MOHAMMED IMRAZ JANIF, Natabua, Lautoka

Assault cases
THE assistant police commissioner said assault on police officers would not be taken lightly and they had arrested quite a few people and charged them and some were in remand.

I hope in future they do the same when they receive assault reports from the general public.
SUKHA SINGH, Labasa

Global peace
HINDU devotees did non-stop religious singing for 24 hours for the sake of global peace for the whole of humanity (“Prayers for global peace” FT 13/11).

That is laudable. I believe humanity is more likely to attain global peace when it ends the arms trade and the arms race. What are the chances of that happening?
RAJEND NAIDU, Sydney, Australia

Opening speech
HIS Excellency the President’s speech to open the new session of Parliament was indeed succinct and thought-provoking.

I am of the view that it will inspire an excellent debate on the motion of thanks next week and bring out the very best of the good debaters on both sides of the chamber.

I look forward in anticipation, to eloquence and quality in the delivery of the contributions of members on the batting order and the views they will each put forward in the debate.
EDWARD BLAKELOCK, Pacific Harbour

Measles fight
LET’S get down to the treatment of this outbreak by closelyfollowing the plan, by awareness, education through media, schools and community.

Total co-operation of all to ones own advantage matters the most.