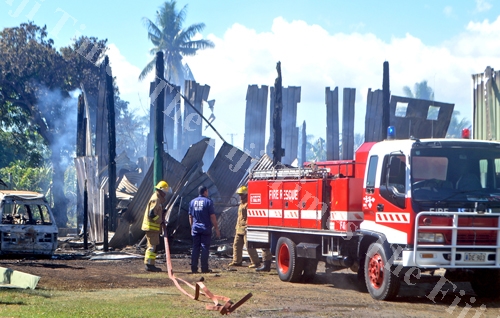 INVESTIGATIONS have started to determine the cause of a fire which destroyed a two-storey wooden structure belonging to the Lovu Mosque in Lautoka.

Residents in the area were awoken by a loud explosion about 12.30am yesterday. Mosque president Mohammed Tariq Khan said the incident was unfortunate as the facility also served as an orphanage for children.

“There were 10 people in the house at the time and they managed to escape with the clothes on their backs, everything else has been destroyed,” he said.

Police spokeswoman Ana Naisoro said the eight bedroom structure was destroyed along with all its contents.

“The 28-year-old caretaker of the Lovu Madarsa woke up to a sound of the explosion and saw flames coming out of room three located on the bottom flat,” she said.

There were no casualties and the damage and cause of fire is yet to be ascertained.

Mr Khan also said the children at the orphanage would be relocated.