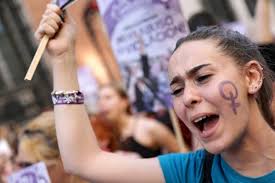 Protesters attend a demonstration against the release on bail of five men known as the "Wolf Pack" cleared of gang rape of a teenager and convicted of a lesser crime of sexual abuse in Madrid, Spain, June 22, 2018. REUTERS/Susana Vera

MADRID – Five men convicted of sexually assaulting a young woman at the Pamplona bull running festival in 2016 were released on bail on Friday, re-igniting outrage over the case which has led to mass protests calling for tougher punishment of sex crimes.

The men, who joked about the assault in a Whatsapp group called “The Wolf Pack”, were cleared of rape but convicted of the lesser crime of sexual abuse in April. Both the perpetrators and the victim are appealing the nine-year prison sentences, meaning the convictions are not final.

A court in the northern region of Navarra decided to free the men after two years in custody, while they await a final sentence, arguing that there was little chance of repeat offences. Two years tends to be the limit for provisional imprisonment in Spain.

Following the court ruling, a crowd filled Pamplona’s central square on Thursday evening and marched through the streets with a banner proclaiming: “We women believe you” – a phrase that has become as widely recognised in Spain as the #MeToo label to denounce sexual harassment in the United States.

Protests were held on Friday outside the justice ministry in Madrid and other cities. In Madrid, protesters chanted: “If they don’t kill us, we are invisible.”

Images of the five men, wearing the white t-shirts and red neck-scarves of the San Fermin festival in Pamplona, have been splashed across newspapers and websites.

The convicts’ loss of anonymity makes the risk of repeat offences “all but unthinkable”, the court said in a statement.

The state prosecutor had originally asked for sentences of more than 20 years each for rape, which in Spain requires a plaintiff to present evidence of specific violence, such as being threatened with a knife or dealt physical blows.

All five, who are from the southern city of Seville and include a former policeman and a former soldier, were ordered to pay 6,000 euros ($7,000) bail, report to police three times a week and relinquish their passports.

New Socialist Prime Minister Pedro Sanchez has promised to provide training for judges in gender equality, one of a series of socially liberal projects for which he is likely to get parliamentary support despite heading a minority government.

The release of the five raised concern across the political spectrum.

“I respect judicial decisions, but as a woman I am very worried to know (the Wolf Pack) are out in the street,” Ines Arrimadas, a prominent deputy from centre-right Ciudadanos party, tweeted. “Let’s agree to revise our penal system to try to avoid these situations.”