WAF workers situation: 28 taken in for questioning in Lautoka 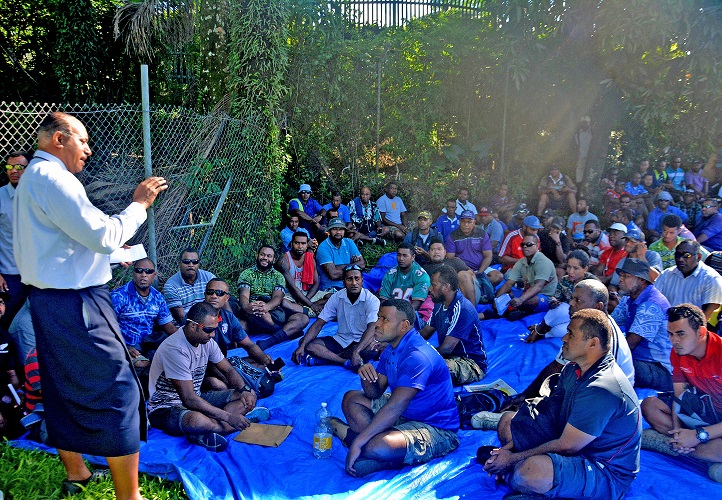 Opposition MP Ro Filipe Tuisawau has a moment with WAF staff outside the Shipping Depot, Reservoir Road on Wednesday, May 01, 2019. Picture: JONA KONATACI

TWENTY-eight former Water Authority of Fiji employees and National Union of Workers general secretary Felix Anthony were taken in by police for questioning yesterday, the detentions taking place after police were dispatched to WAF depots around the country to ensure “contract workers” whose employment ended on April 30 did not enter the premises.

The arrests in Lautoka happened at about 1.30pm.

From about 6.30am, the public and motorists watched as three police vehicles with about 40 officers monitored movements in front of the WAF depot.

About 60 workers were ordered away from the front gate at about 8am and ushered by NUW industrial officer Manueli Yawayawa to a vacant land owned by the Fiji Trades Union Congress on Vitogo Pde.

Police informed the workers that they were not allowed to convene under the Public Order Act.

NUW senior industrial officer Mererai Vatege and lawyer Mark Anthony informed police that the Act was for gatherings in public places and did not apply to private property.

In the process of obtaining the land title to authenticate ownership and while the WAF employees were putting up a tent, police swooped in and took 28 workers in for questioning.

“We don’t understand why the workers were removed from FTUC land which is private property,” Ms Vatege said.

“They had gathered there to await a decision on a meeting between NUW general secretary Felix Anthony and WAF management — all they wanted to know was whether they had a job to go back to or not.

“They were not creating a public nuisance or anything like that.”

When contacted at 7.30pm yesterday, she said the 28 men remained in custody and the union had not received word about whether any charges had been laid and how long they would be detained for.

A senior NUW industrial officer, Shiu Lingam, was taken into custody on Tuesday afternoon and was taken to the Lautoka Hospital yesterday after he developed health issues.

Meanwhile, in a statement last night, Police Commissioner Brigadier General Sitiveni Qiliho said police would ensure the safety of everyone and would not allow unscrupulous elements to disrupt the water supply or operations of WAF by union activists.

“We are here to maintain law and order under the Public Order Act. Our officers have been on high alert to ensure that the situation does not get out of hand,” ComPol said.

“I would like to remind everyone that no strike has been approved and any such action is illegal.”

He also confirmed that more than 20 people were arrested in Lautoka yesterday for allegedly gathering illegally and refusing to disperse when advised by police.

“They are currently being questioned at the Lautoka Police Station as investigations continue.”