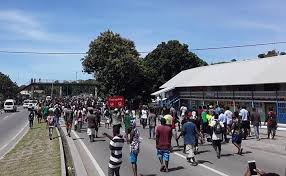 A total of 25 lists of candidates have been submitted to contest New Caledonia's provincial elections on 12 May. Picture: RNZ PACIFIC

NOUMEA, 25 APRIL 2019 (RNZ PACIFIC) – A total of 25 lists of candidates have been submitted to contest New Caledonia’s provincial elections on 12 May.

Most were filed for the southern province where 11 different parties will run.

The lists are now being vetted by the French High Commission and should be made official by Saturday for campaigning to begin on Monday.

Out of the three provincial assemblies a new 54-seat Congress will be formed for a five-year period.

There have been no opinion polls but the unexpectedly tight result in last November’s referendum on independence from France suggests it will be a close contest between the rival pro- and anti-independence sides.

Another independence referendum can be called if a third of members in the new Congress wish to have one.