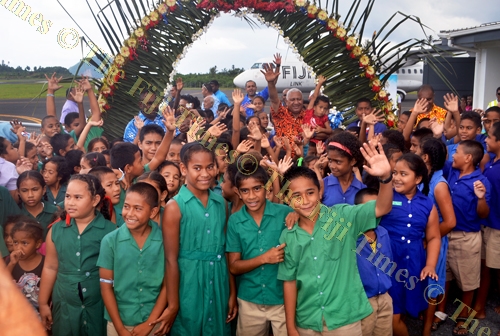 THE Rotuman people will always rally behind FijiFirst, says Gagaj Maraf from Noa’tau to Prime Minister Voreqe Bainimarama who was on the island yesterday to open the Rotuma Airport new chip seal runway.

“I would like to reiterate on our apologies towards the Government of the day for the past events that happened due to our misunderstanding within the council,” he said.

“It is unfortunate that when we came to Suva, you were away in another country and we do hope that when you returned the message was relayed to you, Sir.

“I would like to reassure you that the Rotuman people will always rally behind your Government, the Bainimarama Government, in trying to make Fiji a better place.”

He said with the general election just around the corner, they were hopeful of a positive outcome.

“With the immense commitments that the Government has made towards the development of Rotuma, I will no doubt say today that we would all wish you success in this coming election.”

The FijiFirst Party leader also met some party supporters on the island.