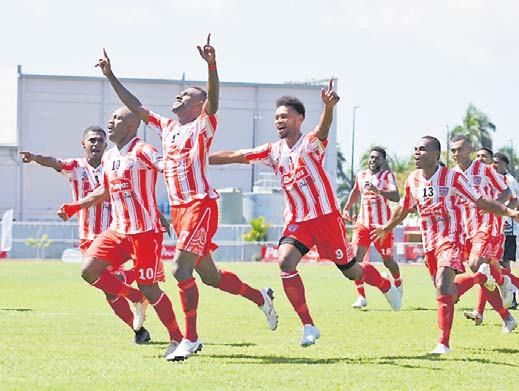 Labasa celebrates after scoring the winning goal against Suva during their match in the Punjas Battle of the Giants. Picture: REINAL CHAND

Defending champion Labasa has been drawn in a tough pool for next month’s Courts Inter District Championship.

The side, which recently won the Punjas Battle of the Giants tournament, will face Digicel Premier League champion Rewa, and Western giants Lautoka and Ba in Pool B.

Pool A has hosts Suva, Navua, Nadroga and Nadi.

“We expect an electronic atmosphere when the competition begins. The teams will have a lot to play for and they have more than enough time for preparations,” Yusuf said.

Meanwhile, competition will be played in three grades at this year’s tournament.

Apart from the Super Premier division, six teams each will participate in the Premier and Senior divisions.

Yusuf said Fiji FA was not able to hold the IDC last year so it decided to get all 20 teams at the competition this year.

“Last year, we failed to host the IDC so many senior division teams missed out. This time all of them will be here to represent their district at the IDC.”

The Premier division will have Tailevu Naitasiri, Tavua and Nadogo in pool A with Nasinu, Rakiraki and Seaqaqa in Pool B.

In the Senior division, Bua will face Savusavu and Lami in Pool A while Dreketi is the top seed in Pool B with Taveuni and Northland Tailevu.

Courts Fiji handed in a sponsorship of $120,000 for the tournament.

The winner of the Premier grade receives $6000.