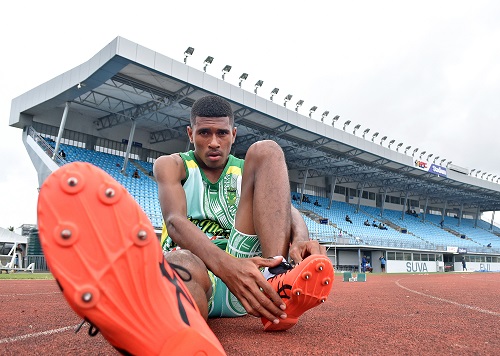 Nikotimo Tuisawana will be carrying the fate of Adi Moapa Secondary School as he is the only athlete representing the school at the 2022 Coca-Cola Games at the HFC Bank Stadium in Suva this weekend.

In addition, this is but the first time for the Vanuabalavu lad to compete at this level.

“This is my first time to compete and a lot of work was put in for me to be able to make it here,” the 16-year-old teenager said.

He says he has been preparing for the Fiji Finals for the past two months.

Like other maritime schools, Tuisawana said there were many challenges he had to overcome in order to be in performance shape.

“I was unable to follow a scheduled diet because the boat to the island had not been coming for a few weeks. This really affected my training as I would only eat root crops which were something I had to refrain from.

“So I had to train even harder to keep in best shape and I didn’t want to get too heavy before I go to compete.”

Tuisawana is in the intermediate grade and will be competing in the 400 metre event.

He said financial difficulties were one of the reasons he was the only athlete from Adi Moapa but vowed to give his best.

For the past few days, Tuisawana said he had been receiving phone calls from family and relatives wishing him the best in the competition and this only drove him to give his best.

“Some of my family members had been calling me and wishing me the best for the games and I really appreciate all the support from them and the school.”

Seeing himself as an underdog, he says he understands that he will have to go head to head with some of the best athletes from schools around the country.

“I have a goal that I hope to achieve, even if I don’t, I will return again next year.”

He thanked old scholars, the school, family and friends for believing in him and promises to give his best for Adi Moapa.