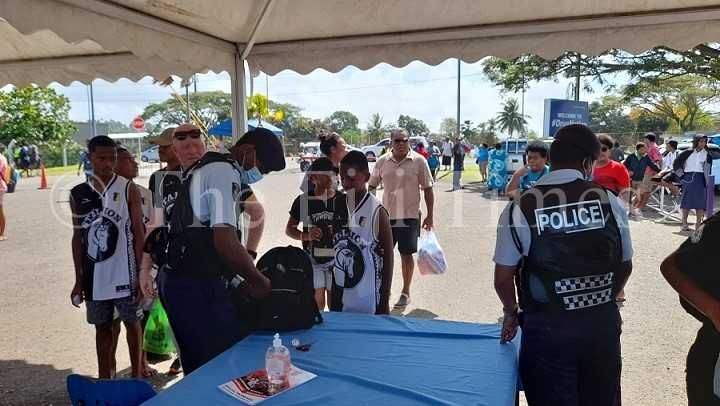 Police officers carrying out bag checks at the main entrance of the HFC Bank Stadium in Suva on Thursday, August 18, 2022. Picture: JONACANI LALAKOBAU

The Fiji Police Force and the Fiji Secondary Schools Athletics Association have joined hands to ensure that the 2022 Coca-Cola Games are safe and problem-free.

The three-day games start this morning after being opened by the Minister for Education Premila Kumar at the HFC Bank Stadium at Laucala Bay in Suva.

“The Fiji Police Force had been proactive in visiting a lot of schools in reminding students, athletes and teachers of their responsibilities towards the games,” Tikaram said.

More than 2700 athletes from about 135 schools will converge at the Laucala Bay complex in the next three days.

Police director operations Senior Superintendent of Police (SSP) Kasiano Vusonilawe said more than 84 officers would be deployed to the games.

This is apart from those who will monitor movements in and around Suva City, including nightspots.

“There had been a long period of time since the Coca-Cola Games have returned, and are looking forward to carrying out the task at hand to safeguard members of the public, especially our children,” SSP Vusonilawe said.

“There will be a lot of athletes, children and supporters around the ground. It will be our role to keep them safe in terms of security.

“There will be more than 80 officers who have been tasked to look after the ground itself. There will be coverage of our roads in terms of traffic, before, during and after the games. Likewise, we will provide coverage outside the stadium.

“We will monitor the CBD of Suva City after the games. We want to make sure children return safely home.

“We will not allow any criminal element to happen. We will also have our dog unit at entry points to check drugs and tracker dogs for crowd control.

“All entry points will be covered to make sure that the Coca-Cola Games 2022 is safe and successful.”

He warns would-be troublemakers to refrain from disrupting the games, especially after 10 students were arrested for damaging properties at an earlier event at the sports complex.

“This is a fair warning to all students and youths coming in for the games to behave. This is what we have been telling team managers and officials to stress to the children.

“They have to behave to be safe and enjoy a trouble-free Coca-Cola Games.”

Gates will open at 6am with the opening ceremony scheduled to start at 8am.

Games proper will start at 10am.