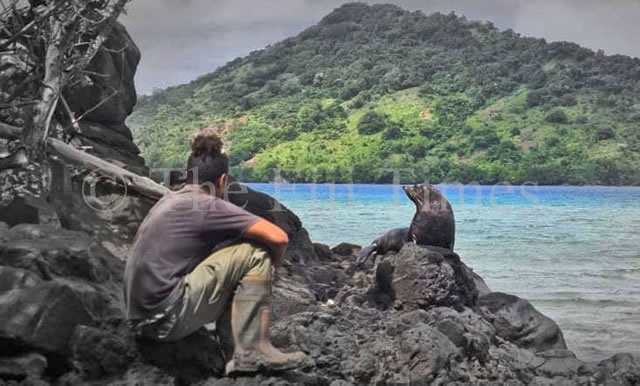 A mystery seal found on the rocks in Rukua, Beqa. Picture: SUPPLIED

A shock sacking and a suspension of two senior civil servants left citizens just as startled as when a mystery mammal was found in waters off Beqa at the beginning of the month.

The survey revealed that 258,053 of Fiji’s total population of 864,132 were living in poverty. It also said close to 130,000 Fijians were classified as “near-poor” and at risk of falling into poverty.

Solicitor-General Sharvada Nand Sharma was also suspended from his job pending a tribunal hearing. He was later terminated and has taken the matter to court. Questions were asked whether the suspension was linked to MP Niko Nawaikula’s court case.

Also this month saw changes to voter details – with Fijians required to use the name on their birth certificate to be registered as a voter – after Parliament passed the Electoral Registration of Voters Amendment Bill.

The month was also special for this newspaper as it marked The Fiji Times’ 152nd anniversary.

SEPTEMBER 1  CHILDREN of Rukua, Beqa were startled to find a mystery mammal trying to scale the village sea wall.

SEPTEMBER 2  ATTORNEY-GENERAL Aiyaz Sayed Khaiyum’s criticism of the counsel involved in the Niko Nawaikula case prompted prominent local lawyer and former Supervisor of Elections Jon Apted to ask whether the 2014 and 2018 elections were free and fair.

SEPTEMBER 4  A SPECIAL day for The Fiji Times. We turned 152 years old. When the founder of the newspaper, George Littleton Griffiths, left Woolwich in London, headed for Port Chalmers in Dunedin, New Zealand, he probably never thought he would one day start a newspaper that would still be around 152 years later.

SEPTEMBER 9  GOVERNMENT has introduced laws to gag its opponents at the next general elections, claims Unity Fiji Party leader Savenaca Narube. The former governor of the Reserve Bank of Fiji (RBF) was responding to the amendment of the Political Parties Act, which requires the opposition parties to immediately provide in writing the impact of their campaign promises on total expenditure and budget deficit.

SEPTEMBER 10  THE island of Kadavu recorded 159 new COVID-19 cases within a 24-hour period and this has worried political party leaders.

SEPTEMBER 12  FIVE political parties united to express their lack of confidence in the autonomy of Supervisor of Elections Mohammed Saneem and have called for an investigation into whether he should be removed from office.

SEPTEMBER 13  THE Ministry of Health and Medical Services will only consider opening containment borders once it achieves its target to have more than 60 per cent of the Fijian population vaccinated.

SEPTEMBER 19  ETHNIC blindness conceals the underlying ethnic inequities and divisions, which has potential to spawn grievances and longterm instability. This, according to Fijian academic and director at Macmillan Brown Centre for Pacific Studies Professor Steven Ratuva.

SEPTEMBER 22  THE Solicitor- General Sharvada Nand Sharma has been suspended from his job pending a tribunal hearing. The suspension is related to a complaint that has been fi led with the Judicial Services Commission against Mr Sharma.

SEPTEMBER 26  THE recent amendments to laws on voter registration will prove costly for people living in areas where government services are not readily available, says prominent lawyer Filimoni Vosarogo.

SEPTEMBER 28  THE only way Fijians can reverse laws requiring the use of birth name in voter registration is at the polls, says Unity Fiji party leader Savenaca Narube.

SEPTEMBER 29  WAS the suspension of Solicitor-General Sharvada Sharma linked to Opposition MP Niko Nawaikula’s case? And was he told to step aside because he advised against pursuing the case against Mr Nawaikula?