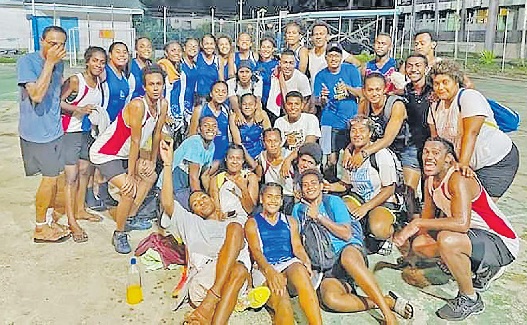 After successfully completing the 2021 game calendar and winning the Adi Nadroga netball tournament, members of the Coastal Magic Netball Club are looking forward to what 2022 holds for them.

Club coach Lai Tabawalu said their players had learned from past COVID-19 lockdowns and had continued training to prepare for the coming season.

“We’re happy that sports events are back,” Tabawalu said.

“Things did not go our way, but we are happy that netball is back. Our preparation for the Adi Nadroga netball tournament was good because our girls were committed to training and improving their fitness standard which led to our win in the open women’s and mix grade. We also took part in the Wairiki 7s in Taveuni.

“Now we are focusing on our fitness standard. Our club consists of girls from the age of 16 to 18, some tertiary students and some players who lost their jobs during the pandemic.

“Majority of the players are those who lost their jobs last year, so this is something that keeps them going. We have about 35 players, three of them are in the national squad. They are Bulou Titilia, Robyn Vula and Ateca Qasenivalu.

“Our club does not only focus on the court, we also do community outreach and community work such as being involved in clean-up campaigns.

“We have helped clean the Naqarai beach and planted trees at the Sigatoka sand dunes national park.

“We have been engaged in four community outreach programs in the past four months.”

“It’s the unity among players and team bonding that keep us going. Our players have the passion for the game.”