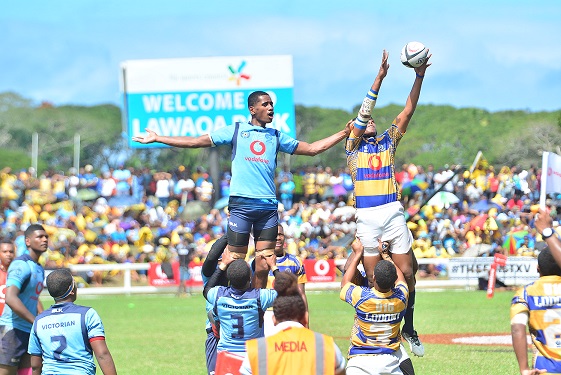 QVS and RKS contest for the ball during a line-out in their Vodafone Deans Trophy U16 grade final match at Lawaqa Park in Sigatoka on Saturday, August 10, 2019. Picture: JOVESA NAISUA

QUEEN Victoria School took home the Deans Trophy U16 title after overcoming a tough Ratu Kadavulevu School side in the final at Lawaqa Park in Sigatoka yesterday.

A try in each half by the team from Matavatucou was enough to secure them the U16 title for 2019.

QVS started strongly with a converted try to take the lead 7-0.

RKS replied with a well-worked out try but the with the conversion unsuccessful, QVS held on to the lead at 7-5 at halftime.

In the second half QVS managed to score another try to seal the win 12-5.