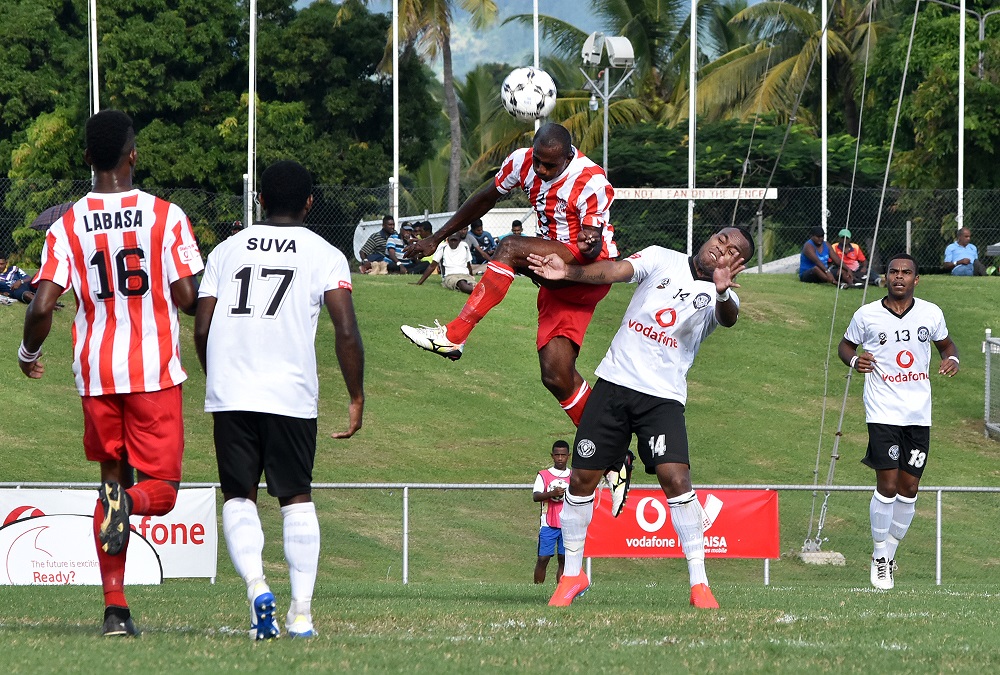 Iliesa Lino in defence for Labasa against Suva's Christopher Wasasala during their clash at the 2019 Vodafone Fiji FACT tournament at Churchill Park in Lautoka. Picture: BALJEET SINGH/FILE

SUVA striker Gagame Feni hit the post late in the game as the Capital City boys drew 1-all with Labasa in the 2019 Vodafone Fiji FACT at Churchill Park in Lautoka yesterday.

The teams were evenly matched in a tight contest.

Ilisoni Logaivou scored for the Babasiga Lions in the 15th minute while Feni equalised in the 24th.

Kumar said his players played out of their positions which was a major concern ahead of the next clash against Tavua.

“I have to work on our defence because we were just trying to contain the opponents and did not move up,” he said.

“The problem was that our midfielders were not pressing. Our players know their roles but they were diverting from it on the field.

“They were going into other areas.”

Suva will take on Tavua this afternoon.

Kumar was the coach who brought back Tavua into the premier division in 2017.

“The boys need to play their roles so we can move forward,” he said.

“We will play Tavua next and they will be tough. I know those boys well because I was their coach before.

“There are a lot of injuries in the team. It was really heartbreaking when Gagame hit the post.” Labasa coach Anand Sami said his side would need to lift their performance in the next game against Lautoka.

Sami said it was anybody’s game against Suva.

“I respect the Suva team and as a coach I really enjoyed watching the game,” he said.

“It was good entertaining football but both teams missed some easy chances.

“We have to go game by game. We have Lautoka next and it won’t be easy especially playing on their home soil.

“They are a very strong team with two years of Oceania Football Confederation Champions League experience.”