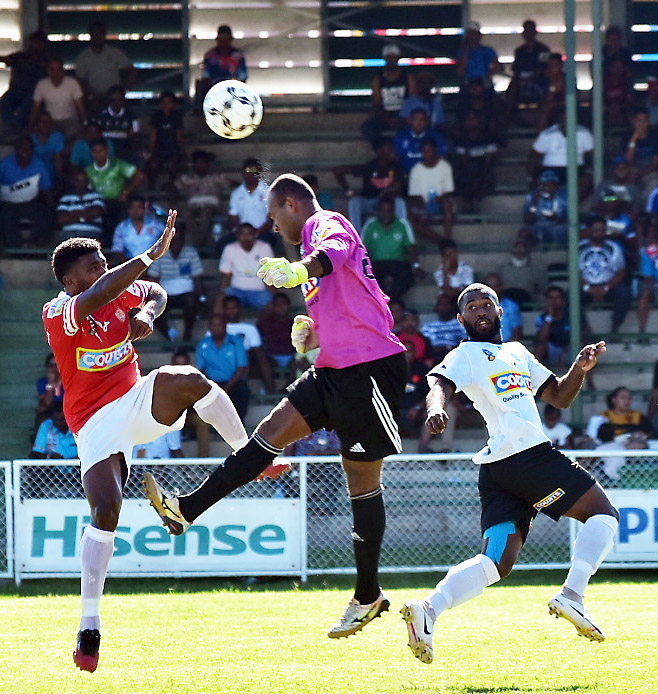 Suva goalkeeper Simione Tamanisau comes out of his mark to clear the ball from Rewa's Setareki Hughes during their match in the Courts IDC at Prince Charles Park in Nadi. Picture:REINAL CHAND

HOST’S Nadi qualified for the semi-final of the Courts Inter District Championship after defeating Nasinu 1-0 at Prince Charles Park yesterday.

Striker Rusiate Matarerega scored the lone goal through a penalty in the tenth minute. Nasinu fighting for a spot to qualify for the semi-final fell short of their campaign after upsetting Rewa 2-1 on day one of the competition.

He said Nasinu gave them a tough time. “I wish to congratulate our players but it was very important for us to qualify for the semi-finals.

“We have achieved that and the players are excited.”

Nadi last won the IDC in 2002 under the presidency of former Fiji rep Navneeda Gounder.

The Jetsetters have won the IDC title on 18 occasions with Ba holding the record of 24 victories.

Nadi last won the prized trophy on home soil in 1999.

The side defeated Ba 1-0 in that year.

Mohin said they were ready to take any team on in the semi-final. He said the most important thing was recovery for the moment.

“We will do our best to get all the players to fully recovered,” Mohin said.

“We will use the same game plan but we need the home crowd support. “The aim is to make it into the final on Sunday.”