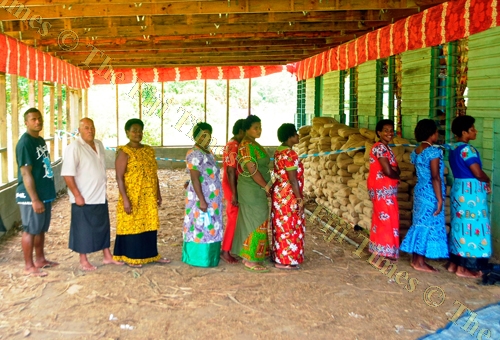 Namara villagers queue up to cast their votes at the village hall in Ra. Picture: BALJEET SINGH

A CLOUD of uncertainty hovered over the people of Nailuva in Ra as they marched into polling stations yesterday.

Village headman Manasa Luqa said a lot was said by visiting politicians and on radio stations.

“We’re still worried here in the village because of the things that people come and tell us and what we’ve heard on the radio.

“A lot of this political discussion scares us. We hear what they say and it worries us. “What will happen? What will happen to us living in villages?”

Mr Luqa said by casting his vote, he hoped that the next Government would look to those depending on them.

“We don’t want anything to happen that will hurt our livelihoods. “We only want a Government that will serve us.

“My only hope is that my vote does not hurt anyone.” A total of 342 voters were expected to cast their votes in Nailuva yesterday.

Meanwhile, 1352 people were registered to vote in the Ra Province yesterday.