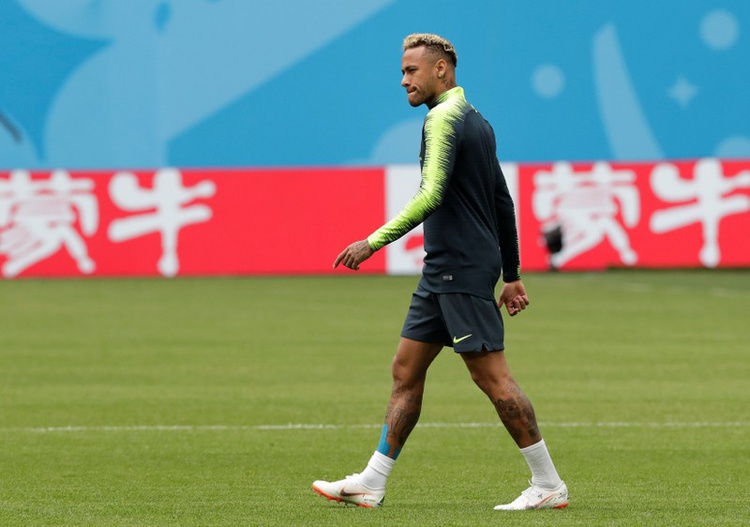 ST PETERSBURG (Reuters) – Neymar needs at least five matches to return to top form after a long injury layoff, but Brazil have not asked their talismanic forward to gamble on his fitness just to be improve their chances at the World Cup, coach Tite said on Thursday.

The five-times world champions drew their opening Group E game against Switzerland 1-1 and play their second match against Costa Rica in St Petersburg on Friday.

Neymar missed a chunk of the season with a fractured right foot and sprained ankle, but returned to play in Brazil’s last two friendlies before the World Cup and started their first match of the tournament.

The 26-year-old has trained with the rest of the squad for two days in a row after sitting out Tuesday’s session due to a sore ankle.

“It’s about five matches, that’s the minimum you need to be full on and he’s already started the process,” Tite told reporters. “There’s evolution taking place, so don’t worry.

“We want to win. It’s a World Cup. But the coach is not going to risk a player’s health or be dishonest to win. That’s a price that is too high to pay.”

The 57-year-old, known for his emphasis on the collective, also denied asking Neymar to curb his individual attacking instincts in order to serve the team better.

“It’s not true. It didn’t happen,” he said. “All of the athletes have this responsibility of playing for the collective and also being individuals.

Tite said he would name an unchanged starting line-up for the match against Costa Rica to give his players a chance to show their character and defended his policy of rotating captains through the tournament.

He also sprang to the defense of center back Thiago Silva, who was heavily criticized during the last World Cup in Brazil but has been named skipper for Friday’s match.

“If we took out everybody who was criticized in the last World Cup there would be nobody playing. We wouldn’t even have a national team. And life and football are not like that,” Tite said.

“There are a number of athletes who have the maturity and experience to take on the captaincy and Thiago is one of them.”