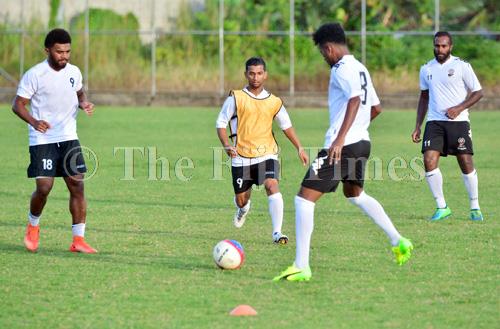 The Suva football side during a training session for the Inkk Mobile Battle of the Giants tournament. Picture: FT FILE/JOVESA NAISUA

THE Suva football side will miss the services of two of its key players during the Inkk Mobile Battle of the Giants tournament next week.

Attacking forwards Tevita Waranivalu and Madhvan Gounder are in Police training camp and will miss the BOG tournament.

Whites coach Gurjit Singh said this had made the team’s job much more difficult.

“The team already had strike force issues before I joined and now two of our best are out,” Singh said.

“We have no choice now but to make do with what we have.

“I am trying to put Sahil Dave and Bruce Hughes in front. We also have Kelvin Chand but we need to work out a good combination before the tournament begins.”

In other matches, on day one:

All matches on Sunday starts at 3pm: