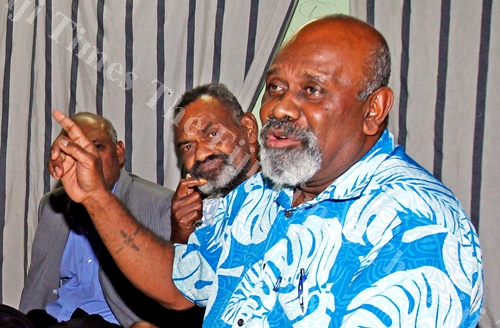 A FORMER FijiFirst member of Parliament has spoken publicly about the FijiFirst Government, pointing largely at what he claims was the undemocratic ways of doing things.

Alivereti Nabulivou, a former backbencher and member of the Standing Committee on Natural Resources, didn’t mince his words as he spoke about what he claimed were national decisions often made by only “two people — number one, number two”.

Addressing residents of Delaivalelevu in Tacirua East on Tuesday night, part of Unity Fiji party’s campaign rally, Mr Nabulivou said he never shied away from speaking the truth regarding the Government because he no longer had any fear to say otherwise.

When approached in Nausori yesterday, Prime Minister and FijiFirst party leader Voreqe Bainimarama neither confirmed nor denied these claims by Mr Nabulivou, but only said those were the acts of losers. “Qori nodra cakacaka o ira na lusi, sa lusi mai na FijiFirst na qai lai dua nodra vosa (That’s the work of those who have lost, when they lose with FijiFirst then they will go talk),” he said.

Mr Nabulivou said he was shocked to find out that the FijiFirst party didn’t accept him as its candidate for the coming general election.

“I applied for FijiFirst, went for the interview and I am the first man out.

“I had more votes than some who were given portfolios in Government, some of them had 500 to 800 votes in the last general elections while I had more than 1000 votes, where is the fairness there? There is no freedom and democracy.

“There was no freedom. Like I said, there is no fairness and transparency because only two guys are leading this Government, there is no democracy,” he claimed.

Mr Nabulivou will contest the 2018 general election under the Unity Fiji party banner.