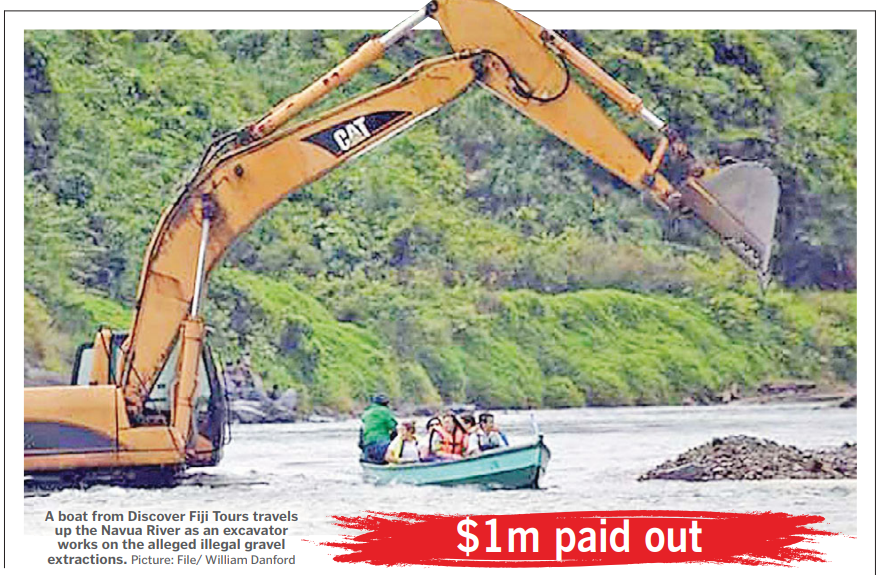 A boat from Discover Fiji Tours travels up the Navua River as an excavator works on the alleged illegal gravel extractions. Picture: File/ William Danford

MORE than $1m has been paid out as gravel royalty to resource owners since the inception of the 2013 Constitution.

Responding to a written question by Opposition MP Jiosefa Dulakiverata on the total amount of royalty paid to resource owners for Low Value Minerals and Materials (LVMM) since the current Constitution came into effect, Minister for Lands and Mineral Resources, Faiyaz Koya said under this Constitution, gravel could not be defi ned as mineral.

He said it cannot also fall in the category that would designate gravel as beingpart of the proposal for the Fair Share of the Mineral Royalty that the Constitution dictated.

But he clarified there was a royalty that was paid to resource owners at the moment that was a portion of the royalty paid to the State for gravel.

Mr Koya said the current breakdown was $2 plus VAT per cubic metre, of which the resource owners received 50 cents.

“Of this amount, $315,025.05 has been paid to the iTaukei Affairs for distribution to the relevant resource owners; this is subject to the applicable VAT rate from 2013 until today.”