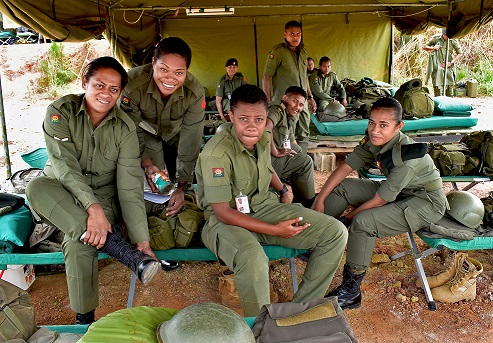 Female military personnel at their camp after the opening ceremony of the Pre Deployment Training for RFMF personnel selected for the United Nations Assistance Mission in Iraq at Black Rock camp in Nadi. Picture: BALJEET SINGH

He said the deployment of troops in recent months had also been aided by international counterparts who had been instrumental in assisting RFMF soldiers.

“The Republic of Fiji Military Forces in involving Fiji’s Strategic Partners recognises the important role that they play in assisting Fiji with preparing Fijian troops for the arduous task of peacekeeping,” said Col Luveni.

“Australia, through the Australian Defence Force, assisted Fiji greatly with the provision of Strategic Lift aircraft that have transported our troops to Sinai and earlier this year His Excellency Mr Johnathan Curr the New Zealand High Commissioner officially opened the PDT (pre-deployment training) for troops selected for service with the United Nations Disengagement Observer Force.

“This highlights the importance of peacekeeping to not only the Republic of Fiji Military Forces and the Government of Fiji but also to Fiji’s Global Defence partners.

The soldiers are expected to complete their training in October.