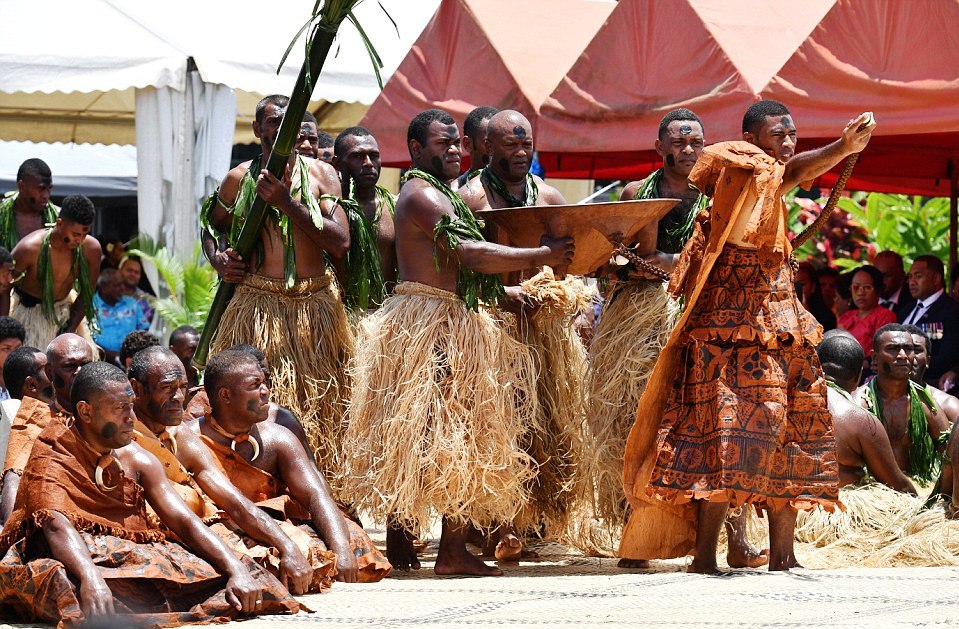 ITS origin was the war at Vugalei.

The Bau tribes on Ovalau at that time presented whale’s teeth to the Lovoni tribes, to secure their assistance against the mountaineers of Viti Levu.

The Lovoni or mountaineer tribes of Ovalau proved themselves valuable allies in that war, which was a complete success.

The over-fed coast tribes are no match for the mountaineers who can bound like wild goats from rock to rock, and who make their war fences on the summits of the highest hills and peaks and quietly wait until the fat coast man is breathless, panting, and exhausted with clambering, and then the painted savages come yelling down upon them like hungry wolves, and in the late attack upon Navosa they not only scattered the fat coast men, and took most of their guns, but made a horrible cannibal feast of the slain and captured.

This feast then was to pay the Lovoni people for helping the Bau tribes in the Vugalei war.

During the past twelve months they carefully hoarded all the property they could get hold of.

The sale or give away of whale’s tooth was made tabu among Bau tribes in Ovalau.

The feasting commenced on the 1st of September to the 11th.

The 9th however was the great day of the feast, when the property was presented.

Each chief of a tribe or village had forty fathoms of painted cloth wound round him and the chief of Nasinu, Rokotakala, was the chief speaker or orator, who presented his ten whales’ teeth, to make lawful for all the Bau tribes to enter the rara or public square.

Then each village presented their offerings of native cloth and whales’ teeth.

More than 3000 whales’ teeth were presented, and in addition to the vast heaps of native cloth.

And every man went down to his house a wealthier man then he left it.

The feasting on pigs, yams during the last ten days at Lovoni, was a fearful and wonderful thing behold.

Allies in native wards had to be well paid, and the help afforded by a friendly tribe or chief is not free but for all they can squeeze out of those for whom they fight in return.

Strangers think it is an easy thing for the Bau chief to go to war with the mountaineers, but his exchequer must be well supplied, from a Fijian point of view, before he can bring in his allies and attack his enemies.