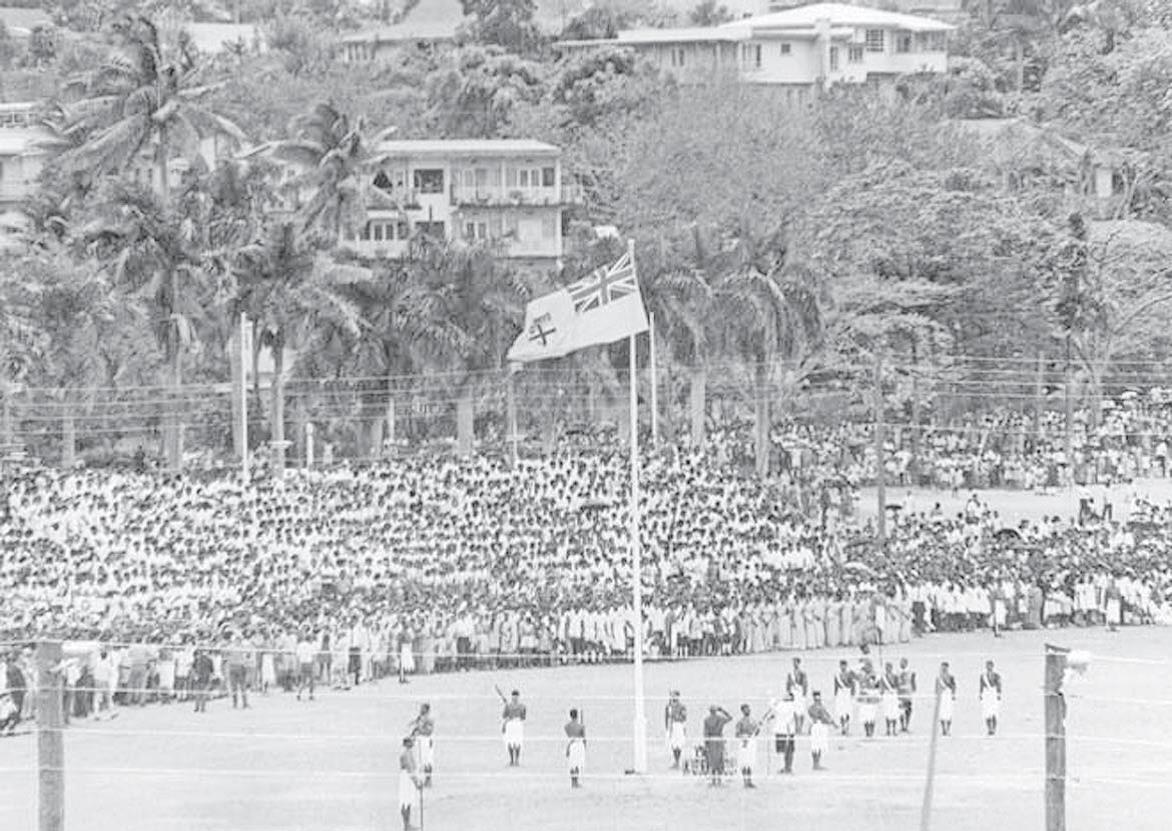 All Fiji citizens stand united as the Fiji flag is hoisted for the first time on Independence Day, October 10, 1970. Picture: teara.govt.nz/

The Future of Fiji is based on a contribution by Mr A. J. C. Foster of Nadi which appeared in The Fiji Times of October 2, 1957.

Unfortunately for the Fijian, he has no real leaders. It is a sad but true fact, which most Europeans and Indians realise, even if they do not broadcast it, that the Fijian leaders have grown away from their people.

They truthfully are not ‘in the koro’ with their Fijian followers for years of European education have inculcated into them the typical attitude of the European towards the Fijian.

To a very great extent, they follow the lead of the European legislators of Fiji and it is a rare thing for one of them to produce an original thought for their people.

The Deed of Cession seems to be their standby and their pillar of wisdom. This is a harsh saying. How true is it, though.

I doubt whether anyone outside the Fijian leaders themselves will question its truth. The Europeans of this Colony are in a minority.

A far greater minority than is realised when it is considered that the greatest numbers are engaged in either trade, Government, mining or airport work.

The true European population of Fiji, by which I mean those who have made Fiji home, is extremely small.

Communities like Nadi Airport and Vatukoula, for instance, are almost entirely outside the civic life of the Colony.

I believe we have amongst those permanent residents a good proportion of men and women who are sincerely interested in the future of Fiji and who would be willing to do a great deal in any organised effort to improve the Colony.

Outside these, the position is different, almost all Government employees are transients, many of the training firms have a big turnover of staff and this applies in a limited measure to the CSR and to the Mining companies.

Amongst these we get persons whose conduct does a deal of harm to the closer relations between the various races in the Colony.

We all known the man who comes here as a tradesman, and who in short order appears in a white coat giving orders to the “natives”.

We also know the other who arrives here, never having seen a servant in his life before, nor has had a “Scotch”.

But in quick time he develops a decided taste in Scotch and is very much the “Turaga”.

Why labour the point? It does remain certain, however, that these people do untold harm in their untutored approach to life in the Colony. And they are no advertisement for European ways of life.

No matter how much work is put into cementing the racial divergencies of Fiji into a harmonious whole, these people will be and have been in the past, always an obstacle to be surmounted.

No doubt much is done unwittingly-nevertheless an appreciable offences is caused.

We have therefore very few Europeans who really work or could work, for the betterment of human relations.

Of the remaining inhabitants of the Colony, it can be said fairly that they get along quietly with no profound interest other than making a living.

The part-European colonies are, however, a factor politically being quite numerous.

They have shown, however, little taste for politics and are quite and well behaved citizens whose attitude to work is an example to the other sections of the community.

Dealing with what can be done with these problems, I can see a whole string of related items starting first with the land question. With racial distastes due to colour, there should be no problem at all.

All that it needed is a great mingling society, a really patient endeavour to understand the basic theory that “a human being is a human being, irrespective of whether he is white, brown or brindled,” a realisation that the world had progressed frighteningly in the last 50 years and an effort from the more fortunate people in the Colony to improve the social and economic standing of the less wealthy.

I stress the racial rivalry, enmity if you like, because although it is not at all apparent, it is there.

Across the bottom of a yaqona bowl, in a public bar is the place where it often rises to the surface.

No-one can doubt this after a few years in Fiji and can readily understand the reasons for it.