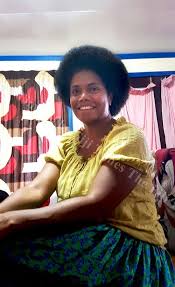 CHARISMATIC local celebrity Lenora Qereqeretabua has ‘soared’ in the preferred prime minister stakes, just 22 days after she was unveiled as a provisional candidate for the National Federation Party (NFP).
A Tebbutt Times Poll has inked the political novice’s name onto the list of preferred prime minister after she captured three per cent of the votes of the 1000 people surveyed.
According to those surveyed, Ms Qereqeretabua should be a contender for the top job, alongside political heavyweights – Voreqe Bainimarama, Sitiveni Rabuka and Ro Teimumu Kepa.
The former radio talk show host and TV presenter also edged her own party leader in the preferred PM votes. Professor Biman Prasad is also on the list at 1 per cent.
Since her entry into the political realm, the now public relations consultant participated in her first campaign trip to the North with the party leader this week and released three campaign videos which were uploaded on social media sites – attracting thousands of likes, shares and comments.
According to the poll where people were free to answer with any name their choice of preferred PM, FijiFirst party leader and Prime Minister Voreqe Bainimarama was the popular choice with 64 per cent.
SODELPA leader, Mr Rabuka is the second choice with 23 per cent, Opposition Leader Ro Teimumu Kepa is third with 6 per cent, NFP provisional candidate Ms Qereqeretabua is the fourth choice with 3 per cent, NFP leader Prof Prasad is the fifth choice with 2 per cent and Unity Fiji leader Savenaca Narube is sixth with 1 per cent votes.
Mr Bainimarama was the first choice for both major ethnic groups, however was significantly more popular choice among people identifying as Fijians of Indian Descent (93 per cent) than iTaukei (45 per cent).
Among the iTaukei, 37 per cent named Mr Rabuka, 10 per cent Ro Teimumu, 3 per cent Ms Qereqeretabua, and 3 per cent Prof Prasad.
There were also significant differences by gender.
Females were more likely to name a female (8 per cent Ro Teimu, and 5 per cent Ms Qereqeretabua), and less likely to name Mr Rabuka (19 per cent vs. 27 per cent for males).
Mr Bainimarama was more popular among older voters (54 per cent for those 18-29 years compared to 69 per cent for those 30 or older), with more people choosing him in the rural areas.
Mr Rabuka was named more frequently by younger voters (30 per cent for those under 30), and in the Northern Division (32 per cent).
There were no statistically significant differences recorded for either Prof Prasad or Mr Narube across gender, ethnicity, age, or location in Fiji.
In the May 2017 poll, Mr Bainimarama polled 49 per cent support, Mr Rabuka was at 16 per cent while Prof Prasad and Mr Narube polled 2 per cent and 1 per cent respectively.
Ro Teimumu was not placed in the May poll because of her decision to retire from politics, but since changing her decision last month, she polled 6 per cent within few weeks in the latest poll as the preferred choice for PM.
Methodology:
Poll dates: February 5-8
Sample: 1000 adults eligible to vote
Coverage: National
Method: Computer assisted telephone interviewing
Question asked: If there was an election held in Fiji tomorrow, who would you prefer to see succeed as prime minister?