147 tourists board PAPA as it resumes flights to Palau 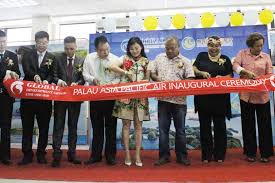 147 tourists board PAPA as it resumes flights to Palau. Picture: ISLAND TIMES

KOROR, 06 FEBRUARY 2019 (ISLAND TIMES) – One hundred and forty-seven tourists boarded the Palau Asia Pacific Air (PAPA), which now flies under the management of Global Development Group, as it began its flight to Palau, carrying passengers from Hong Kong and Macau on January 31.

A ceremony for its inaugural flight was held at the Palau International Airport and was attended by various Palauan government officials and Chinese businessmen on February 2.

PAPA Chairman and Global Development Group President Selina Zhong told Island Times in an exclusive interview that PAPA is also eyeing to purchase additional planes in the future and to fly routes from different cities of the world to Palau.

Zhong also assures the guaranteed safety of passengers as she shared that the plane has been reviewed by the World Safety Organization.

In her speech during the inaugural ceremony, Zhong expressed that she hopes the airline will help bridge new friendship between China and Palau.

“We hope by doing that we can inject more to the economy growth of Palau,” Zhong said via aid of a translator.

Global Development Group is also behind the establishment of a resort in Aimeliik State, the Wyndham Global Resort.

House of Delegates Speaker Sabino Anastacio, who was among the guests during the ceremony, shared his optimism that the airline will help bring more tourists to the country this year following its drastic decline last year.

Meanwhile, Palau Visitors Authority (PVA)Chairman of the Board Ngiraibelas Tmetuchl stressed the importance of having an airline that caters regular flights to and from Palau, adding that charter flights also pose a challenge in developing online mechanisms for Free Independent Travelers (FIT) to purchase tickets.