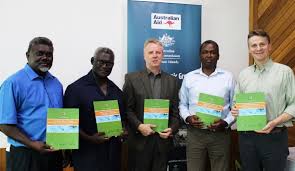 HONIARA, 27 JUNE 2018 (SOLOMON STAR) – An estimated 12.7 percent of the country’s population which equals to about 78,500 people in Solomon Islands live ‘below’ the poverty line and are regarded as ‘poor.’

This was highlighted by the Minister of Finance and Treasury Manasseh Sogavare when he officially launched what he described as the first-ever report of the Solomon Islands poverty maps based on the 2012/13 Household Income and Expenditure Survey (HIES) and the 2009 Population and Housing Census.

The country’s current population stands at more than 600,000.

The finance chief said the finding of the report had presented a new challenge for the government to bring down development to the rural populace with much urgency because this is where most of the people live under the poverty line.

“Since we know that poverty is more a rural phenomenon, tackling this falls within my government’s policy focus to bring service delivery to the majority or 87 per cent of the population in the rural areas,” he said.

The Deputy Prime Minister said a previous report showed poverty increases in the provincial level but as the findings went further into ward level, a lot of interesting insights has been revealed.

“Previously, at the provincial level, we found that the poverty incidences were significantly higher in Makira and Guadalcanal provinces.

“And although Makira had the highest poverty rate, today, as we go deeper down to the lowest geographical area or ward level, we see that there are wards in Guadalcanal province such as ward 13 – Walasi and ward 9 – Avuavu that account for the highest concentration of populations in poverty in the entire country, with 59.2 per cent and 59.0 per cent respectively,” he added.

Sogavare said there is no official evidence of these previously, and these new findings shed light for the first time in these areas.

He described the findings of the report as timely, because in less than 12 months from now, the country will be heading to the national elections in early 2019.

“The findings and the maps clearly portray and illustrate the magnitude and spatial distribution of the proportion of the population in poverty at the ward levels. It should be a useful guide to set the direction and strategic focus for the current and upcoming political leaders towards addressing and alleviating all forms of poverty in our villages, wards, provinces and in our country,” he said.

Meanwhile Government Statistician Douglas Kimi said it is for the first time a new methodology is used to combine the HIES and the 2009 Census data to produce ward level poverty estimates.

“To illustrate this further, the user friendly maps portray the poverty estimates much clearer and one can easily see the geographical distribution of high and lower level poverty within and across wards in the provinces,” he said.