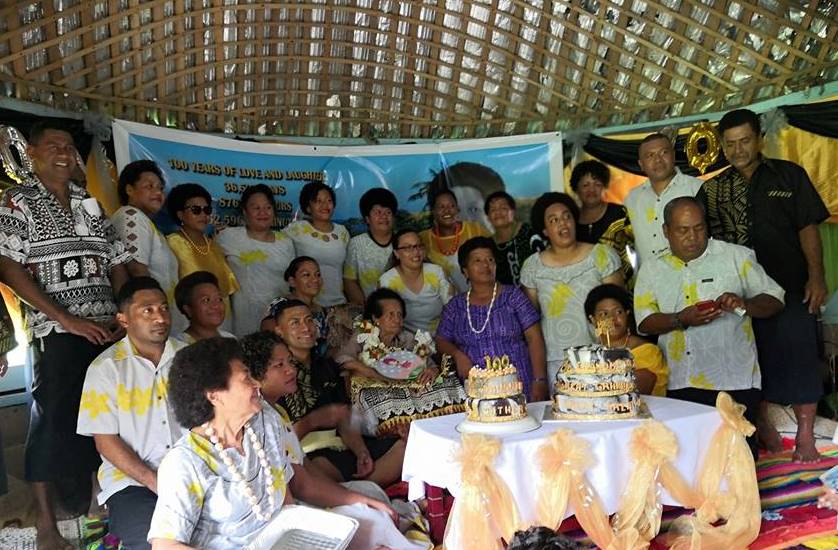 CELEBRATION is a time of thanksgiving. It is a time of acknowledgement. It is also a time of getting together to enjoy moments of life and success.

On April 22, a joyous occasion brought together a six-generation family of Ono-I-Lau to celebrate the life of their mother, grandmother and mentor Sera Tarau’s 100th birthday.

This event was not just a huge one for the family but for every Fijian because we hardly get to celebrate a centurion’s birthday in our families.

It is always the highlight of any Fijian family to celebrate the 100th birthday and for Sera Tarau’s family, it was not just a celebration of life but a time of reflection of her devoted life as a mother and a Christian.

The couple has 12 children.

Her long and healthy life is no secret to her dedication to the vanua and her love for her family.

A devoted Christian, the Ono-i-Lau lady always has time for everything and everyone and this was evident in the major birthday celebration held a few weeks ago.

This was also shared during the birthday celebration.

“I cannot thank God enough for the love and many blessings that he had showered upon me,” Ms Tarau said.

“It is only through God that I am still alive today. It is not by my power but the grace of God.”

Grandson Luke Waqanivere said the fact that his grandmother had a very good upbringing would have been one of the major reasons for her long life.

“With her diet; there was no secret, but she seems to eat less of everything,” Mr Waqanivere said.

“She still eats ice-cream, butter and eats red meat. Her favourite is the chopsuey. She does not have any chronic diseases, but she suffers from gastritis. Her blood pressure is normal and blood sugar level is normal.

“Her vision is excellent. She does not use reading glasses. She was able to recognise most of her grandchildren except Sotiana Navugona whom she last saw in 1997.

Amidst all the reminiscing and the celebration, it was inspiring to note that the 100-year-old woman was still very alert and she remembers things well especially the special dates, where she keeps her money and is able to relate the family tree well going six generations back.