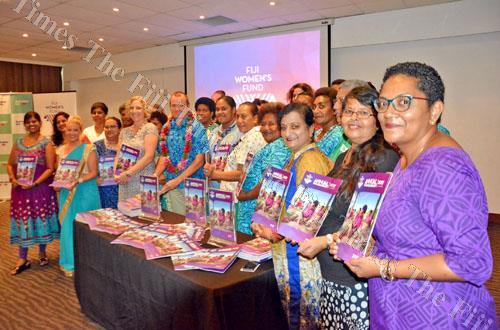 Australian High Commissioner John Feakes, with garland, is pictured with participants during the Fiji Women's Fund launch at the Holiday Inn in Suva on Friday, March 9. Picture: JONACANI LALAKOBAU

A TOTAL of $1.9 million in funding has been committed towards 14 diverse women’s groups, networks and organisations in Fiji as part of a five-year initiative.

These women groups, networks and organisations either come from or have reach to rural remote women and marginalised groups that have been selected to receive financial support from the Fiji Women’s Fund (the Fund).

The fund is an initiative of the Australian Government funded Pacific Women Shaping Pacific Development (Pacific Women) Program committing up to $A10.5m from July 2017 to June 2022.

Its objective is to provide women’s groups, organisations and networks in Fiji with the support that they need to improve women’s lives, particularly those in rural and remote areas or who are marginalised or disadvantaged.

Last week, the Fiji Women’s Fund (the Fund) launched its first annual report in conjunction with International Women’s Day showcasing its achievements since its inception in 2017.

According to the fund manager Michelle Reddy, it had been an exciting eight months of co-creation with the fund’s steering and grants committee and the women’s movement in Fiji.

“Staying true to the heart of the fund, we have worked with and alongside myriad stakeholders and partners especially women’s groups, networks and organisations which has led to tremendous achievements within the inception period,” Ms Reddy said.

As such, in January 2015, the Australian Department of Foreign Affairs and Trade (DFAT) commissioned a civil society sector analysis that included a specific focus on women’s civil society organisations (CSOs) in Fiji to find out how they work and what their needs were.

The analysis recommended that DFAT investigate the feasibility of establishing a locally managed women’s fund to support Fijian women CSOs.

Later in November 2015, DFAT commissioned a three-member design team to develop the Fund.

The design team consulted with a range of stakeholders including key women’s CSOs and rural women’s groups, government, private sector and development partners.

The fund’s steering committee provides ongoing strategic guidance to the fund and ensures that implementation is in accordance with the agreed strategy and principles, and provides support to develop and maintain effective relationships with stakeholders and the Fiji women’s movement.

According to the annual report, the frequency of meetings reflected the busy year for the fund primarily focused on its establishment.

This also included design of the fund’s logo, undertaking the first call for proposals and development of grant and financial management documents including its grants manual and finance and operations manual.

The report noted that the first call for funding opened in August. Both the literature reviewed and feedback from stakeholders during the fund’s design emphasised the need for the fund to use a simple application process that could be completed in a number of ways.

There was also general support for a two-stage process where applicants are invited to submit a short expression of interest and following initial acceptance would proceed to a detailed proposal.

It was also recommended that for the second stage, the Fund provide assistance with proposal development and project planning.

Taking on these recommendations, the Fund advertised the expressions of interest (EOI) using extensive media platforms such as social media, community radio, newspapers and other media platforms such as emails. The Fund team members also took the opportunity to share information about the Fund’s first call for funding at various meetings and events. The Fund also conducted a total of 16 information sessions in Suva, Taveuni, Navua, Lautoka, Labasa, Rakiraki, Ba, Nadi and Sigatoka reaching a total of 596 individuals. Sessions were facilitated in English, iTaukei and Hindi languages as a way to ensure a diverse range of women’s groups, networks and organisations were able to receive information about the call for funding.

Expression of interests were invited from women’s organisations, groups and networks in Fiji that work on one or more of the following priority areas:

* elimination of violence against women;

* women’s leadership, including increasing women’s representation in informal and formal leadership and decision-making spaces; and

Out of a total of 226 expressions of interest applications received, the report noted that 16 were invited to submit a full proposal.

In launching the report, Australian High Commissioner to Fiji John Feakes highlighted the Australian Government’s ongoing support for gender equality and women’s empowerment in Fiji and the Pacific.

“Australia’s investment in the Fiji Women’s Fund reflects our commitment to work alongside Pacific governments, civil society and women’s movements to progress the status of women and girls in the Pacific, including in Fiji,” Mr Feakes said.

“Gender equality and the empowerment of women is a key pillar of Australia’s foreign policy and we continue to invest in this area significantly.”

Mr Feakes also congratulated the 14 partners to receive support from the fund and looked forward to tracking the progress of their work in the coming years.

COVID-19: Two Fiji Airways recovery flights on their way to Nadi from LA